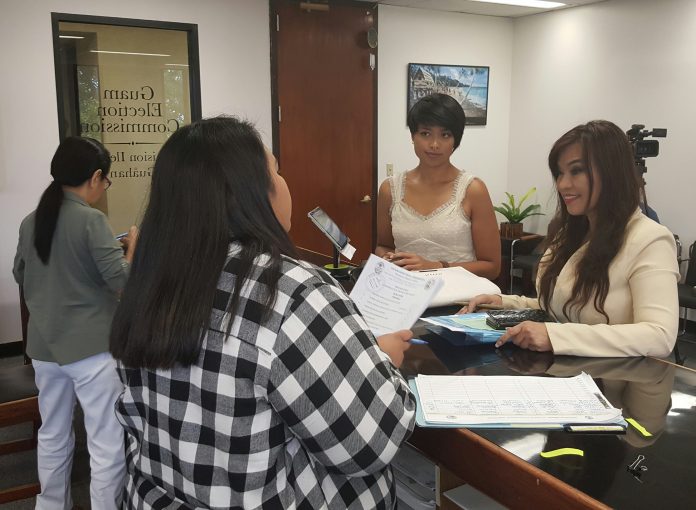 “I wanna do something for our community.”

Guam – Tuesday was the last day candidates of the 2018 campaign season were allowed to file for a shot at being elected to public office. Pacific News Center caught up with aspiring contenders, each hoping for a crack at one of 15 senatorial offices now up for grabs here on island.

It seems running for elected office isn’t a decision easily reached by all who dare the rigors of the campaign trail—not even for the toughest of the tough! Jose Acfalle San Agustin served his country for 30 years in the US Marine Corps. The could-be lawmaker is running as a Republican.

PNC: “Just tell us—you’re in good company, you’re not the only one who waited till the last minute to file—were you still scratching your head on this? Were you still trying to figure out whether you were going to run?”

JOSE: “Well, yeah—absolutely! Yes! Ah, so it’s a long thought whether I should or not, simply because of the way things are happening now. One would have to wonder ‘why would you wanna do this?’ And for me, it’s always been in my heart that I wanna do something for our community.”

For others, the choice to run comes naturally. GOP contender Roland Blas is attempting his third run for senator. The longtime government employee has worked at the legislature before, and recently resigned his post at the Retirement Fund in order to toss his hat in the ring once more.

PNC: “Well they say third time’s a charm. What pushed you to decide to run again this time?”

ROLAND: “Well, you know, I just followed my heart and my soul, prayer to God and His guidance. I heard this little voice, and I just decided to follow it and continue again the same journey, because at the end of the day, we are here, if elected by the people of Guam, we’re here to serve, to do our best, to make the right decisions for our government and our people.”

And while education may ever remain among the top professed priorities among aspirants to the hallowed halls of the Guam Congress Building, it’s difficult to debate the sincerity of a longtime teacher.

Perhaps not surprisingly for an experienced volunteer and school instructor, Democratic candidate Meilou Milligan said she found the paperwork an easy feet. Documents neatly bound and tucked between her forearm and torso, the senatorial hopeful struck a confident tone.

PNC: “What unique priorities do you bring to the legislature?”

MEILOU: “I’m an educator, OK? So, I want to help our children—to give more priority to education. The youth is our future. The island’s progress depends on our youth.”

By 12:20 p.m. Tuesday, 19 Democrats and 16 Republicans had registered to run for senator. At last check, PNC was looking at five registrants for governor, three for attorney general, three for delegate, and one for auditor.

Aside from a few ringing phones, work was quiet, concentrated, and orderly at the Election Commission Tuesday. And if Executive Director Maria Pangelinan has anything to say about it, the process of finalizing candidacies and preparing for the August 25 primary will remain a smooth one. Pangelinan and her staff worked until early Saturday evening getting ready for final filing early this workweek.

“As far as the review of the candidate packets, we’re pretty caught up with that,” Pangelinan said. “We received three packets this morning. And, so, as we speak, they’re being worked on and reviewed. We should be finished with those, maybe early afternoon.”