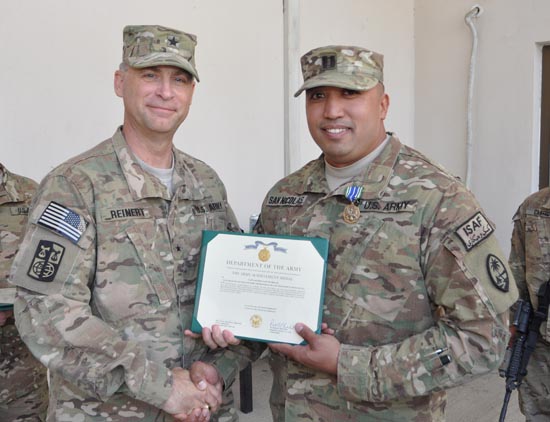 In his other hand, San Nicolas grips a Sharpie. For two years he has served as chief of Guam Fire Department, leading nearly 300 firefighters and paramedics in his full-time civilian employment. He constantly writes himself notes, jots down information pertinent to his directorial position.

It’s almost ironic. In civilian garb, San Nicolas helps save lives. In an Army uniform, he could need to do the opposite.

“There’s a yin and yang to what I do,” San Nicolas said at his Kabul office. “There are a lot of similarities with issues and challenges being in the National Guard and Fire Department. In both organizations, I am in charge of men and women who truly believe in what we do. Firefighters, (emergency medical technicians) and non-uniform personnel serve and save our island and its people. Soldiers protect our country and freedom. Both are professions of honor and tradition.”

San Nicolas is a prominent Government of Guam employee out of nearly 600 soldiers Guam sent to Afghanistan. About one-third of the battalion consists of local government employees, yet San Nicolas is the only director-level warrior in the group.

His Afghanistan responsibilities mirror those on Guam. San Nicolas’ soldiers were dispersed to five locations, covering more territory than any of the battalion’s seven companies. On Guam, he has to manage what goes on in 12 precincts throughout the island.

“I made sure that the people surrounding me are bought in to my intent, vision and goals for my organization,” he explained. “I lay out basic guidance with some limits and allow the next level of leaders to make it happen. I conduct frequent and regular meetings using technology to my advantage to do azimuth checks and find where I need to lean in a little more.”

San Nicolas added, “Along with good leaders, you have to make sure that the people you place under those leaders are a good mix of skills and experience. These factors are critical the more decentralized your organization gets.”

For 18 years, San Nicolas has been a firefighter. He admits he was hesitant at first to accept the fire chief position because he needed more “seasoning.” But at 36, he became one of Guam’s youngest – if not the youngest – individuals to take the Fire Department helm.

“Our organization was starving for leadership. It was in a critical state of affairs to the point of not having necessary equipment – like ambulances — to conduct the most basic life saving duties,” said San Nicolas. “I still had another 10 years at least to go before I should even be thinking of becoming fire chief. But even in the face of many critics, I went forward. Since then, with the support of the administration, we have made a steady climb back to a respectable organization and continue to progress forward.”

With his leaders, San Nicolas established Guam Fire Department Blue Print 2020, a plan that will take his organization into the future. It’ll bring solutions to the current and predictable challenges, he said.

San Nicolas still needs to be home to continue implementing the plan. Task Force Guam is close to completing its OEF responsibilities, but he’s still focused on what remains to be done in Afghanistan.

“He’s the type of commander that leads from the front where he is easily recognizable and an inspiration for his troops,” said Master Sgt. Duane A. Perez, Echo first sergeant. “He is innovative and cunning in military strategy and is meticulous to minimize any problems within the unit.”

“He is a firm and caring commander, a leader with the ability to provide direction, motivation and purpose,” added 1st Sgt. Kenneth M. Cruz, Delta Company first sergeant. “He’s a leader who leads by example and takes care of Soldiers at the cost of his own comfort.”

Lt. Col. Michael A. Tougher, Task Force Guam commander, recommended San Nicolas to lead Echo shortly before the battalion left Guam in March 2013. Technically, Echo formed specifically for this mission via Soldiers from other units. The unit will deactivate after returning home.

We put this unit together at the last hour. I felt if there’s anyone who can unite them quickly, it would be Capt. San Nicolas,” Tougher said. “He had an incredible team of leaders and experienced noncommissioned officers who knew what they would be facing. We needed them to come together quickly and become one team. Capt. San Nicolas was the right individual to make that happen.”

Either as firefighter or Soldier, San Nicolas cannot escape the fact that he can be called for something fatal. His life is such that, unfortunately, death and/or misfortune can surround him at any minute.

“It takes a special breed to do what we do as both firefighters and Soldiers. That breed has similar character traits and sense of duty,” said San Nicolas. “I draw strength from others and focus on the positives. My ultimate remedy is God, my family, laughter and music. I try to live life everyday like it’s the last because death surrounds us.”

Yes, music. In Afghanistan San Nicolas plays guitar for Guam’s choir at Sunday masses. He’ll jam regularly with his musical Soldiers who recently swept a talent contest. He prides himself in his professional relationship with his soldiers, and is commited to their morale and overall safety.

“I am a family man who is personable with a sense of humor. I work hard, but I enjoy leisure time with my Soldiers,” San Nicolas said. “I still don’t think that I am a prominent employee, just in a prominent position to effect progress. I am just a fellow Government of Guam firefighter and soldier that is here to serve and contribute to the best that I can.”