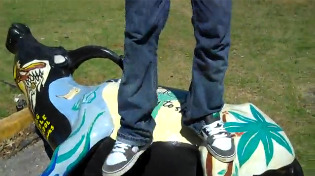 Guam – A video that was posted on youtube.com last night raised a stir in the community before it was removed by the youtube user this morning.

In the video a boy was seen vandalizing the Macy’s carabao statue outside of the Micronesia Mall.  The video shows the boy stomping on the statue and breaking its horns.  The person behind the camera is heard encouraging the activity.  It was posted under the username thyth123 and was titled “breaking the Macy carabow Guam.”

Macy’s Store Manager Ryan Torres would not comment on when the destruction of the carabao occurred.  Torres told PNC News that the family of the boy has come forward and talked with Macy’s about the issue which Torres says has been resolved.

He said they are working to repair the carabao and thanks the community for their concern.