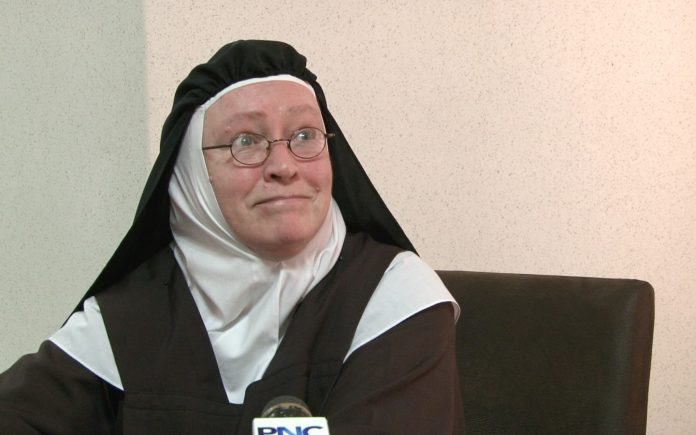 Mother Dawn Marie says when public pressure on the controversial Yona property came to a head, he requested the Carmelites lie about a $2 million gift which paid off the seminary loan.

Guam – Before the Archdiocese held its press conference on the matter, the Prioress of the Carmelite nuns on Guam reinforced years of suspicions that suspended Archbishop Anthony Apuron was not being totally upfront about that controversial Yona seminary property.

Mother Dawn Marie held a media event of her own, stressing that he lied when defending changes to the seminary’s deed, and that Apuron even tried to pressure the local order to go along with the lie.

“They decided that they wanted the statement from the sisters to match what they were trying to do, you see.  Because they were already having so many different troubles with people becoming aware of what happened, and things like that.  So, they thought that they would bolster up the case by saying, ‘Oh, yes this is what we gave the property for.’  And it’s completely untrue,” Mother Dawn Marie said.

In 2003 a $2 million gift was made anonymously by the mainland headquarters for the Carmelite Order to pay off the Archdiocese’ loan that purchased the property and its building.  Mother Dawn Marie said Apuron did not honor the terms of the donation, specifically that the Carmelites not be named.  She also alleges that when questions began to arise publicly, and calls were made for Apuron to define and defend legal changes made to the ownership of the property, he emailed her superior — pressuring the order to state on the record that the gift was meant for what became to be the Redemptoris Mater Seminary and the San Vitores Theological Institute of Oceania, which she stressed was a lie.  Archdiocese spokesperson Father Jeff San Nicolas said he has no reason to believe Mother Dawn Marie was not telling the truth about Apuron’s request.