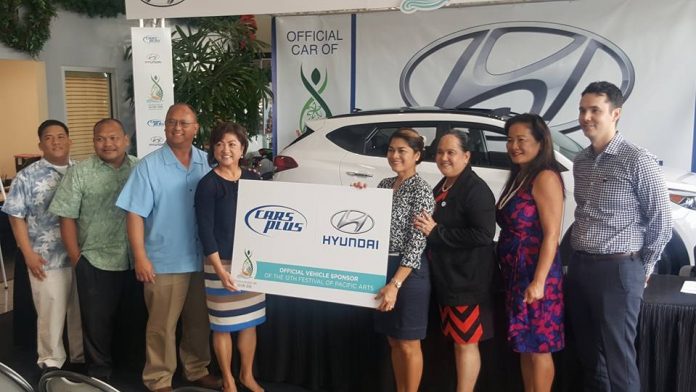 Cars Plus and Hyundai are now the official vehicle sponsor for the 12th Festival of the Pacific Arts.

Guam – At a special ceremony yesterday, Cars Plus announced that they will be providing 30 new Hyundai vehicles for the event for delegates to use. Also during the ceremony, the Guam Visitors Bureau gave an update on FestPac. According to GVB General Manager Nate Denight, they received confirmation that all 27 Pacific island nations will be in attendance, which means the island can expect about 3,000 delegates next year for the event.

Cars Plus Executive Director Joyce Crisostomo says they’re excited to support the largest cultural event in Guam’s history. She explains, “They say we’re just a dot in the whole world, no we’re not. We may be a dot but we will show the world that even if you have a different language, a different culture, it’s about bridging them together and understanding just what that’s about. Now we’re going to come together here in our beautiful island of Guam.”

To keep up with the latest on FestPac, visit www.festpac.visitguam.com