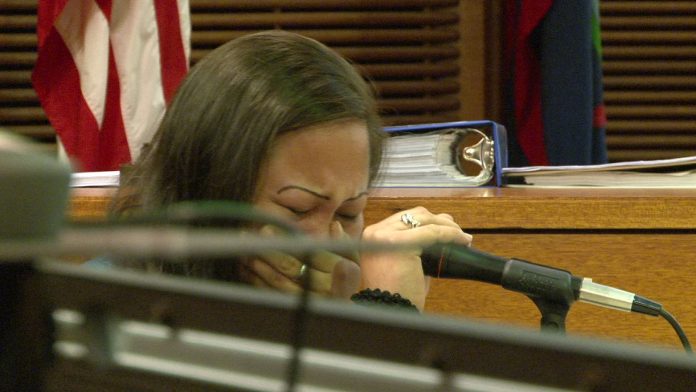 Suzana Lotino describes her final moments with her daughter, Alzana.

Guam – Tearful testimony today from the mother of Alzana Lotino, the toddler who was allegedly beaten to death by her mom’s boyfriend in January this year. Suzana Lotino describes in harrowing details the very moment her daughter died.

It was the sight no mother should ever have to see. Suzana Lotino could barely contain her squeals on the witness stand when she was shown pictures of her dead daughter. She saw them nonetheless and testified that some of the bruising in Alzana’s autopsy pictures did not match the bruising she noticed just hours before her daughter died.

“I asked him about the bruising on her back [and he said] that he was massaging her,” explains Suzana, noting that she then told her then-boyfriend John Castro, “I was getting mad I told him you know she’s just a baby. The way he massages is hard, I can’t even handle him massaging me. He was saying that she was complaining of back pain.

Watch video below. Fast forward to 6:40.

Suzana says she came home from work around 4 in the morning, January 11th. Castro and Alzana were asleep on opposite ends of a mattress in the living room. Alzana was shirtless, she says and when she came closer she noticed some bruising on the baby’s lower back. When she touched the spots, she says her daughter reacted to the pain. So she picked her up to comfort her then put her back in her play pen.

When Suzana woke a few hours later, she and Castro noticed Alzana had vomited in her sleep. She says they washed her down then Castro left for work. But that whole morning, says Suzana, her daughter seemed lethargic. She ate very little food and developed a fever. So she gave her daughter some ibuprofen. Moments later, Suzana describes how the situation began to spiral out of control.

“I thought that she was falling asleep, I thought the medicine was kicking in like it usually does. She stopped,” Suzanna says, choking on tears, “she stopped rolling around. And when I was holding her hand, her grip. She lost her grip.”

And then in harrowing detail, she describes the very moment she lost her daughter.

She stopped responding. I was trying to wake up her up. Her eyes were still a little bit open. Her breathing was fading,” she noted. “She stopped moving.”

In a panic, Suzana says she dialed Castro first before calling 911. Medics arrived minutes later and as she got into the ambulance, she noticed Castro walking back home.

“He looked scared, panicked,” Suzana recalled as she overheard him telling medics that he might have rolled over the baby in his sleep.

Later while at the hospital, Suzana says she and Castro were sending each other text messages. Asked what they were about, Suzana says, “I don’t remember all the texts. All I know is that I told him that he needs to turn himself in … he was having suicidal thoughts.”

The defense grilled Suzana on specific details about the week leading up to her daughter’s death and the dates and times she and Castro spent babysitting Alzana.

Castro is facing murder and child abuse charges and could be sentenced to life in prison if found guilty. Trial resumes Wednesday in Judge Canto’s courtroom.