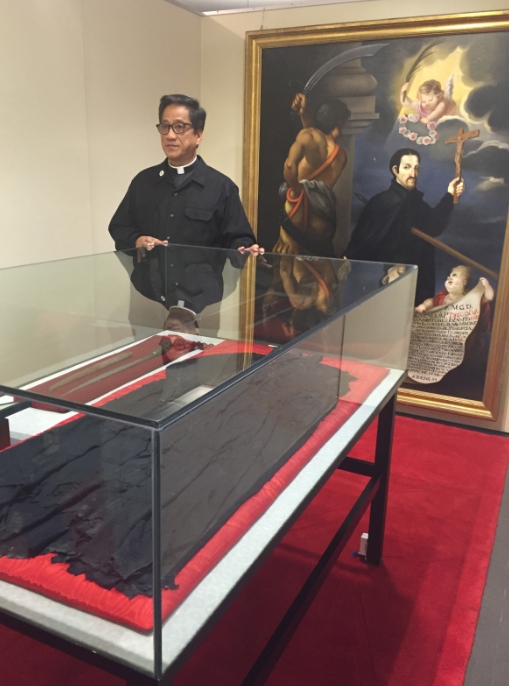 Guam – The Dulce Nombre de Maria Cathedral Basilica Museum is now open again to the public. Father Paul Gofigan took PNC on a tour through the museum that is only open for a limited time.

Described as the “crown jewel of the island’s faith,” the cathedral museum has re-opened after a  three year hiatus.

Although Father Gofigan could not specify the reason behind the museum’s previous closure, he said the re-opening was vital because the cultural exhibit represents faith maintaining its culture and culture maintaining its faith. Father Gofigan explained the significance of preserving the island’s most sacred and treasured cultural relics.

“What we’re seeing here is the actual cassock of Blessed Diego San Vitores. Which was donated to the Archdiocese to Bishop Flores and we have the cassock here and we also have the machete that possibly cut his head off and this was also donated by the Spanish government giving us back something that they felt belonged to us,” he said.

Father Gofigan also noted that the museum is open for a limited time due to a shortage of funding and a lack of volunteers.

He hopes donations will help the museum acquire a laboratory required for some of the artifacts such as the Blessed Diego Luis San Vitores’s cassock — the oldest religious artifact in the museum.

“We are in dire need of a laboratory like any museum should have to make sure we have professionals to come in to make sure we preserve some of these artifacts because as you can see some of the material the cotton on that side the sleeve is beginning to deteriorate and is probably due to temperature, due to lighting, and that’s why we need a expert and that’s why we need a laboratory,” he said.

The cathedral museum is open to the public during the hours of 4:30pm to 8pm until January 8 and is free to the public, but donations are greatly appreciated.