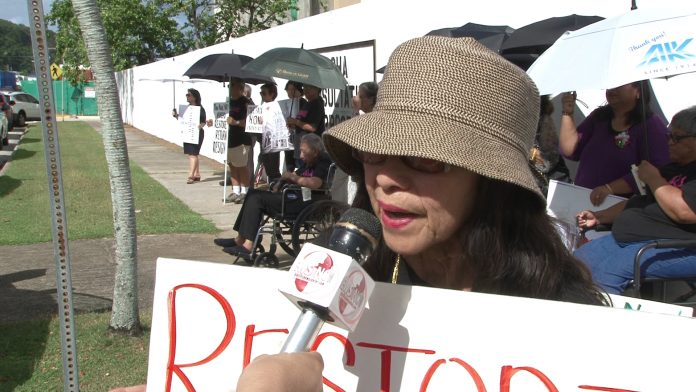 Protesters held signs outside the Dolce Numbre de Cathedral-Basilica that called on Archbishop Apuron to step down.

Guam – Another protest was held in front of the Agana Cathedral-Basilica over the weekend by the Laity Forward Movement.

The protesters gathered for their seventh protest in the last several months, expressing their frustration with Archbishop Anthony Apuron.

One of the organizers of yesterday’s protest, Lou Klitzkie, says they will continue to hold these prayer protest rallies until they get their voices heard.

“Our purpose today is to restore the two priests that have been fired by the archbishop. We want Father Paul Back as pastor of Santa Barbara Church. We want Msgr. James [Benavente] back as rector of the Archdiocese of Agana and the Catholic Cemeteries. We also don’t like the way the archbishop is having a lot of the neo-catechumenal presbyters in parishes. We don’t want anymore presbyters in our parishes,” Klitzkie said.

Klitzkie also says that the group and many Catholics are calling for the return of the controversial Redemptoris Mater Seminary in Yona, which the Archdiocese has stated was never turned over to a third party.