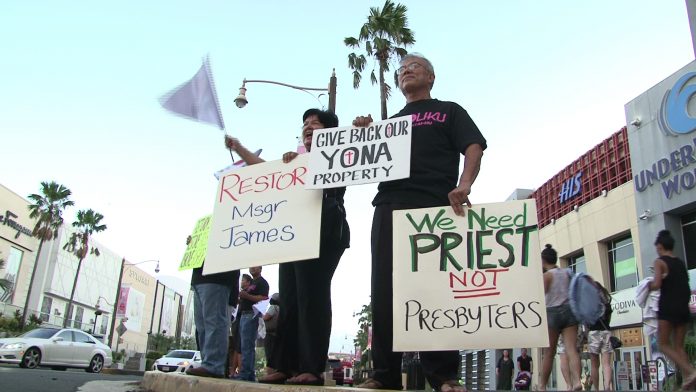 The Concerned Catholics of Guam and other members of the catholic church reiterated their concerns regarding Archbishop Anthony Apuron’s actions in recent years.

Guam – Another silent protest was held yesterday by some members of the Catholic community to coincide with Archdiocese of Agana’s Sweethearts Ball that was held at the Outrigger Guam resort.

Dozens of Catholics showed up, holding signs opposing Archbishop Anthony Apuron, some even calling on his resignation. Some of those we interviewed reiterated their stance regarding the controversial Redemptoris Mater Seminary that the Archbishop allegedly gave away to the neocatechumenal sect.

Others also called upon Archbishop Apuron to restore two beloved priests who were removed from their duties.

“To give a huge multimillion dollar property to an entity that does not belong to our archdiocese just doesn’t make sense, and as my sign says here, the church property is not his to give away,” says MaryLou Diaz Martinez. “I don’t have any personal grudges with any individual members of the neo, and everybody should be able to worship the way that they prefer, but if you don’t follow the catholic church– and I would think the archbishop would be the first one to point out those differences in our teachings in our beliefs–if you don’t follow, then don’t claim to be catholic. And that’s what we’re opposing also.”

Members of the Laity Forward Movement as well as the Concerned Catholics of Guam have been holding silent protests to call attention to these matters. But the Archdiocese has maintained that the Yona property was not deeded over to a third party and that the Archdiocese still maintains control over the property.

“I’ve been approached by many people who say the Concerned Catholics of Guam are against the archbishop and that is incorrect. We stand along with the archbishop as far as our tradition and our faith in the traditional sense, and we are not against him in any way. We are just asking him for accountability and to answer to us as he is our leader and our shepherd and we expect that of him,” says Teresa Tayama, who was at the silent protest.

The Catholic Sweetheart’s ball that was being held by the Archdiocese at the Outrigger Hotel is an annual event to celebrate the sacrament of holy matrimony.