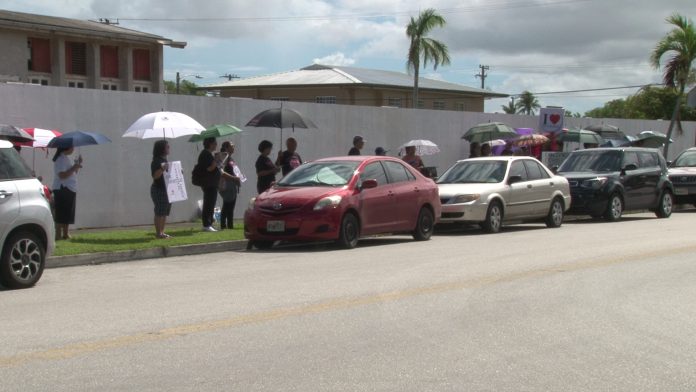 The “silent protest” was held Sunday morning outside of the Cathedral de Basilica in Hagatna.

Guam – Another demonstration was held in front of the Cathedral De Basilica in Hagatna. This time, demonstrators called it a silent protest and had a clear message for Archbishop Anthony Apuron.

Controversies have been surrounding the Archdiocese of Agana in recent years, many of which involve actions taken by Archbishop Apuron.

Catholics have been holding prayer demonstrations and even created a non-profit group called Concerned Catholics of Guam, calling attention to the instability within the church and for more action from Catholic leaders in Rome.

During yesterday’s protest, we spoke to organizer Lou Klitzkie who had a clear message for the Archbishop.

“We’re holding this protest because we want the archbishop to know that we are out here demonstrating that we are very unpleased with the way he runs the church. For one thing, firing the priest; two, giving away the church property, which is the RMS [Redemptoris Mater Seminary] now; and three, the invasion of the neocatechumenal priest in our parishes,” says Klitzkie. “It’s important for me because we want Father Paul back in the Santa Barbara Church. We want Msgr. James back into the Archdiocese of Agana and we want the return of the RMS to Archdiocese of Agana.”

Father Paul Gofigan was removed from the Santa Barbara Church about two years ago for allegedly allowing a convicted sex offender to continue to work on church grounds and exposing him to children. However, Father Paul has maintained that the man was not an employee of the church. He also says the man was convicted of the crime over 30 years ago and that his victim at the time was an adult.

Last year, the archbishop fired Msgr. James Benavente as rector of the Archdiocese, accusing him of financial mismanagement. Many Catholics, some with respected financial backgrounds, expressed dismay at the archbishop’s action.

Between 40  to 50 people showed up to the protest holding up signs that read “Rome, Hear Our Voices” and “I love my church.”