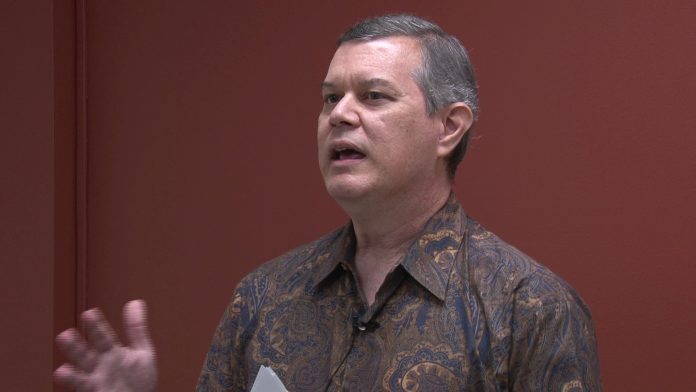 CCOG Vice President Andrew Camacho says the seminary should be shut down.

Guam – The Concerned Catholics of Guam is calling out the people behind the highly controversial Redemptoris Mater Seminary, saying they are not a reputable institution of higher learning. The CCOG says that the RMS is nothing but a fraud.

“In my opinion the Redemptoris Mater Seminary in Yona is a sham,” asserted Andrew Camacho, the Vice President of CCOG.

Camacho called for a press conference today to call out the people who run the Redemptoris Mater Seminary, going into detail as to why they believe the RMS should be shut down.

“This actually poses a danger to the people of Guam. Without proper screening, there is an increased potential to admit seminarians with psychological problems,” Camacho noted.

This is because, Camacho said, there is no clear screening of qualifications for incoming seminarians. Camacho quotes what he calls a reliable source who has knowledge of the inner workings of the RMS organization.

“Quoted here, ‘As for the visiting professors, at best most could be considered as lecturers or seminar givers, but certainly not visiting professors since many of them do not even teach in another place of learning. What was sold to the faithful of Guam as a place of higher learning is basically a fraud,'” Camacho quoted his source.

“Our archbishop, Anthony Apuron, did not require them to be well educated. He only required them to be neocatechumenal,” Camacho pointed out.

Today’s press conference comes on the heels of a statement from Archbishop Anthony Apuron last week in which the disgraced archbishop refused to lift a deed restriction on the multimillion dollar RMS property.

Archbishop Savio Hon Tai Fai, the temporary administrator of the Archdiocese of Agana acknowledged earlier this month that the deed of restriction on the RMS property essentially conveys the property to the third party that controls the Redemptoris Mater Seminary in Yona. Archbishop Hon also announced that Archbishop Apuron had defied Pope Francis’ orders in 2015 to lift the deed restriction on the property. Archbishop Apuron, in his statement, denied this allegation.

“That was a surprise,” responded Camacho when asked for his reaction to Archbishop Apuron’s statement. “I wasn’t expecting that Apuron would submit any kind of statement.”

“Basically his statement contradicted what Archbishop Hon has said and basically it contradicts what Rome has said. So it’s just kind of a shock to hear that statement.”

Camacho says the CCOG will not stop their campaign until the three R’s are achieved: Return, Restore and Resign; return the RMS property, restore two beloved priests and for Apuron to resign.