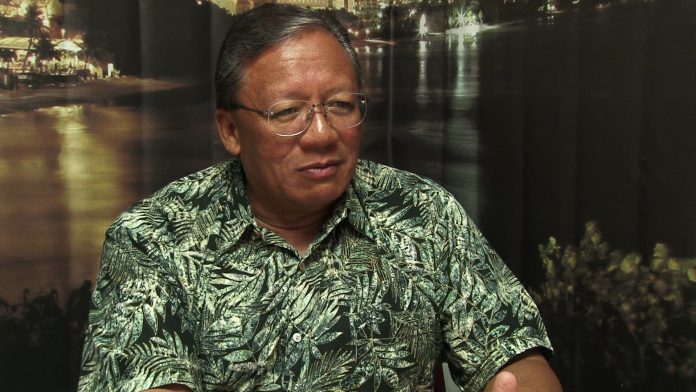 The Concerned Catholics of Guam is a not a church organization, says CCOG Vice President Dave Sablan. He says they are a Guam corporation.

Guam – The Concerned Catholics of Guam say Archbishop Anthony Apuron’s general decree ordering catholics to distance themselves from the group has no binding authority whatsoever.

CCOG Vice President Dave Sablan says this is because they aren’t a church organization, they are a Guam coporation.

“Frankly, if he had known what we were gonna be doing, I don’t think he would have done that in his right mind,” says Sablan.

They have essentially been blacklisted from the Archdiocese of Agana. On Sunday, Archbishop Anthony Apuron issued a general decree ordering catholics of Guam to dissociate from the Concerned Catholics of Guam, calling them a prohibited society that disseminates fraudulent or malicious allegations.

“We were formed under the corporate laws of Guam. So we filed our articles of incorporation and our bylaws with the Department of Revenue and Taxation. When we formed it in December 2014, we outlined all the objectives that we intended to accomplish and all contained within the bylaws of our corporation,” explains Sablan.

In the general decree, it states that CCOG is using the name “catholic” without ecclesiastic authority–in other words, without the permission of the archdiocese through canon law.

“We have catholic in our title, but we’re referring to the individuals who banded toether. If we were to use the term catholic as prescribed in canon law, it would be in the instance of saying something like the ‘Catholic Society of Guam,’ ‘the Catholic Organization of Guam,’ ‘the Catholic Charities Appeal.’ In that context, yes, you would need to have the permission of the archbishop,” says Sablan. “We don’t view ourselves connected to the archdiocese at all. We’re not being sanctioned by the archdiocese in order to follow what the archdiocese wants us to do. We’re doing things on our own but we are trying to help the archdiocese from a secular perspective mostly.”

In fact, Sablan says CCOG was created in December 2014 not to go against the archdiocese or the archbishop, but rather to help them. He says they tried to meet with the archbishop several times but each time their requests were ignored.

Sablan also emphasizes that they do not disseminate fraudulent or malicious information.

Asked what advice he would give to catholics who are unsure as to the validity of the general decree, “I would say don’t even worry about this decree. I think we are doing the right thing. We wanna help our archdiocese,” he says.

You can read the general decree issued by Archbishop Apuron below:

General Decree of the Ordinary

WHEREAS The group calling itself Concerned Catholics of Guam, established within the Archdiocese of Agana and purporting to be an association of the faithful therein, has, as an organization conducted itself in the following way:

Setting itself to recruit, by membership or other representation, members of the faithful of this Archdiocese, under the guise of promotion of public worship, Christian virtue, and charitable endeavor without having been erected by competent ecclesiastical authority (c.301 §1);

Assuming the name and usage of the term “Catholic” without the consent of competent ecclesiastical authority, as required by law (c. 300);

Actively promoting opposition, both ad hoc and organized, public and private, to legitimate acts of ecclesiastical governance placed by the Ordinary or those acting in his name (c. 1373);

Instigating manifest and public opposition to the Ordinary, with whom they are obliged to preserve communion (c. 209);

Soliciting and disseminating fraudulent or otherwise malicious allegations against the person of the Ordinary (c. 220);

AND WHEREAS Membership, promotion, or direction of such a society is manifestly detrimental to the communion of the faithful in this archdiocese, the good of souls, and to ecclesiastical discipline;

AND WHEREAS The law provides the general principle that membership of such societies is constituted a delict (c. 1374);

AND WHEREAS It is proper to the office of the Ordinary, as the competent ecclesiastical authority, that this above cited canon be applied to such societies within the territory as seems prudent and necessary to the Ordinary, by means of particular law

BE IT THEREFORE KNOWN, EX DECRETUM GENERALIUM, The group calling itself Concerned Catholics of Guam is, hereby, established as a prohibited society under the particular law of this archdiocese.

CONSEQUENTLY All members of the faithful in and of this archdiocese, clerical or lay, are to:

THIS IS ESTABLISHED AS PARTICULAR LAW IN AND FOR THIS DIOCESE by means of this Decree and shall take effect on midnight on Tuesday, June 14, 2016 (cc. 8, 29).

Such members of the faithful in and of this archdiocese who have heretofore retained membership in this group are paternally and pastorally urged to renounce such membership and avoid the organization, until such time as it be reconciled to competent ecclesiastical authority and this law be repealed.