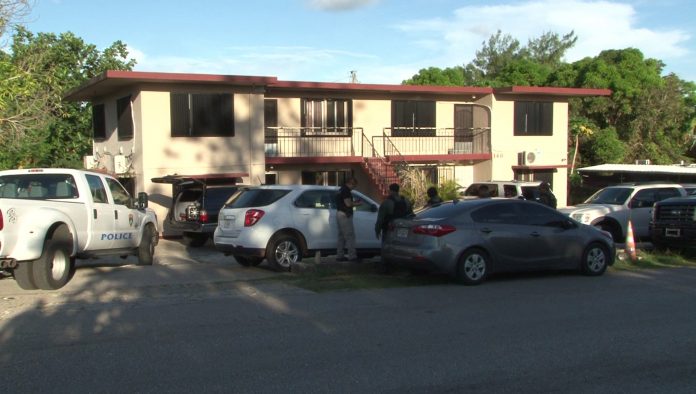 Police recognized the vehicle parked next to the Acura Integra that was stolen from a Payless Supermarkets parking lot and later used in the armed robbery.

Guam – Police were seen executing search warrants as part of an investigation in the armed robbery of a tourist and her daughter. Two suspects have been arrested and one of them allegedly mocked a news report of the robbery he had just committed.

According to a magistrate report, a tourist and her daughter were robbed at gunpoint as the suspects reportedly fled in a stolen vehicle that was later found abandoned at the Micronesia Mall parking lot.

The report says GPD was able to identify the suspects through the getaway vehicle used in the robbery. The vehicle, an Acura Integra, had been reported stolen from a Payless Supermarket parking lot. Fortunately, an officer was able to identify the owner of a vehicle that was parked next to the stolen Integra. Through that individual, police were able to put together the remaining pieces of the puzzle.

The report says that after the suspects, identified as Jeremy Allen Evaristo and Xavier Anderson Tedtaotao, robbed a woman and her daughter, they abandoned the stolen car at the Micronesia Mall. They were picked up by another individual and taken to a residence. The owner of that residence told police that when Evaristo and Tedtaotao arrived at his house, Evaristo “showed him a news article concerning the robbery and Evaristo laughed about it.”

Yesterday, officers with the MDTF were seen converging on a residence in Dededo where they recovered several stolen items. The suspects were also apprehended from there.

Both Evaristo and Tedtaotao were booked and confined.