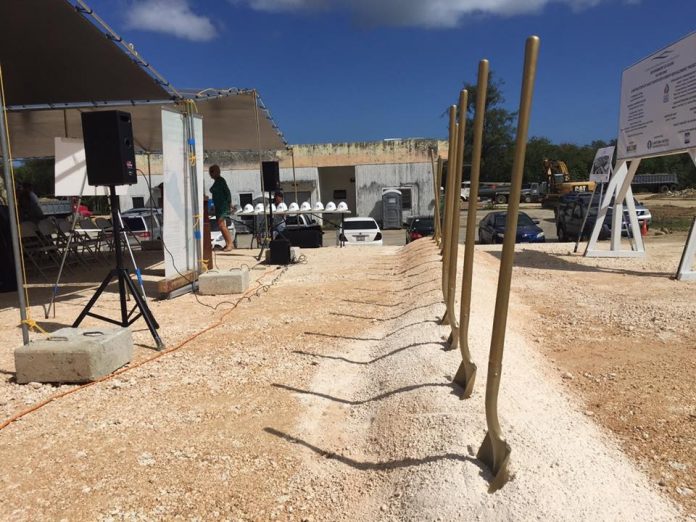 Today, GWA broke ground on a new $60-million wastewater treatment that promises to mitigate some of these issues.

Guam – Southern residents have long faced problems with overflowing wastewater polluting their rivers and streams. Today, GWA broke ground on a new $60-million wastewater treatment that promises to mitigate some of these issues.

It takes up 10 acres down south and its the fix needed to mitigate the long-standing southern water issues….it takes up 10 percent of GWA’s $600 million plan to fix Guam’s wounded water infrastructure and the United States EPA has ordered GWA through the united states court system to build it and today, GWA began construction on the long-awaited Agat/Santa Rita wastewater treatment plant.

“There is an old wastewater treatment plant in Agat that is failing,. It’s not doing its job properly so that will correct that situation. It will also allow us to take the Baza gardens wastewater treatment plant and convert that to a pump station; we will be pumping all the sewage over to the new Agat/Santa Rita wastewater plant. And that means we will no longer be putting effluent into the Togcha river,” said CCU Chairman Joey Duenas.

One of the main problems is that the current Agat plant as well as the surrounding plants down south is easily overwhelmed when it rains. Southern residents have long experienced water outages due to this problem in addition to overflowing sewage into the Togcha River.

The minimum amount of water the new Agat/Santa Rita plant can handle is 1.6 million gallons, with a maximum capacity of 9 million gallons. This is very similar to the northern Agana wastewater plant, which is capable of handling 12 million gallons of wastewater.

The Agat plant right now is only equipped to handle 700,000 gallons of sewage a day despite a daily demand of close to a million gallons. This is 40 percent over its capacity. The new plant will also allow GWA make big changes in the future.

“This will provide an enhanced level of treatment and allow the decommissioning of two older treatment plants and it will also provide service expansion along those areas, in the future the plant can be expanded to accommodate up to 13 millions of gallons a day if there is a need to take flows from our navy counterparts,” said GWA General Manager Miguel Bordallo.

CCU commissioner Joey Duenas says the plant is expected to be complete by December of this year.