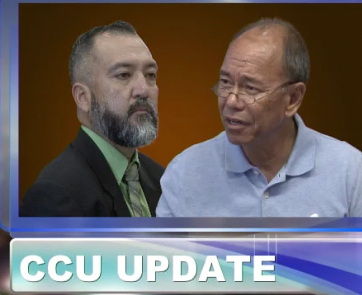 Ridgell is pushing for the rejection of Guam Power Authority’s proposed new power plant contract. The contract in question was awarded to Korea Electric Power Company or KEPCO.

According to bid documents, KEPCO and the Korea East-West Power Company or K-EWP have entered into a consortium agreement for this project. The bid documents state that KEWP is responsible for 40 percent of the bid.

According to Ridgell, KEWP is the same company that was operating the Cabras 4 power plant when it exploded. GPA filed an insurance claim after the explosion and was awarded $125 million for the explosion from its insurer. GPA has said this $125 million will go towards helping pay for the construction of the new power plant.

“There is a lawsuit against KEWP by the insurance company that paid out the $125 million for that explosion. For me, I don’t understand how you can award a contract to a company that is already in legal, in litigation right now, being sued, and accused of being at fault for the explosion of the Cabras 4 power plant,” Ridgell said.

In an interview with Patti Arroyo on NewsTalk K57, Ridgell said last night’s meeting was unproductive because instead of answering his concerns, the meeting had become an oversight meeting on him. Sanchez also called into K57, saying he respects Ridgell and that the senator is entitled to his own view of the contract. Sanchez also responded to the senator’s litigation concerns.

“There is going to be risk in any agreement. And I think you can eliminate risk and you can’t walk away from a proposal just because a subsidiary got sued. It is a $17 billion company. Companies get sued all the time. That doesn’t mean it is true,” Sanchez said.

The power plant contract now goes to the Public Utilities Commission for final approval. Meanwhile, Sen. Ridgell is also scheduling an oversight hearing on the matter next week.