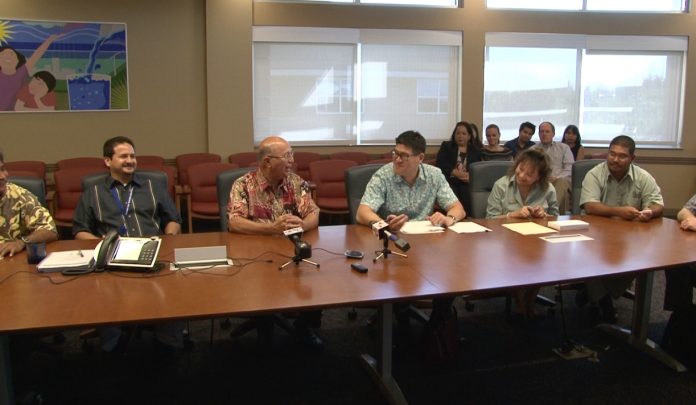 Guam – At the same time that Gov Guam finished up borrowing $143.3. Million on the bond market, acting governor Ray Tenorio criticized the Consolidated Commission on Utilities for “committing Guam’s ratepayers to hundred’s of millions of dollars in new debt.” Adelup wants the CCU to consider the affordability of water and power bills.

The CCU, and GEDA officially secured the borrowing of $143 Million on the bond market to fix up Guam’s water and wastewater systems.

Meanwhile, acting governor Ray Tenorio issued a press release, minutes before the signing criticizing the CCU for “committing Guam’s ratepayers to hundred’s of millions of dollars in new debt”. In his release Tenorio sends this message to the CCU “don’t forget the poor.”

“People pay basically a water bill and a power bill, while we’ve been increasing the water bills, the power bill has gone down dramatically, not because of what we’ve done, we are trying to cut costs on both utilities, GWA and GPA, we continue to cut costs but the biggest cost cut has come from the world oil market declining,” says Duenas.

“Unfortunately progress isn’t free, we wish it was. I’m an elected official. I’ve been in the legislature, we’d all love to tell everybody that we could give you all these things and it wont cost you anything, but that wouldn’t be truthful to our community. So I sympathize with the sentiments of the Governor and the Lt. Governor and would agree with them but I think they would also be the first to agree that they’re trying to solve education, healthcare, [and] public safety. They have their challenges financially, It cant be done for free they borrow money,”  said Sanchez.