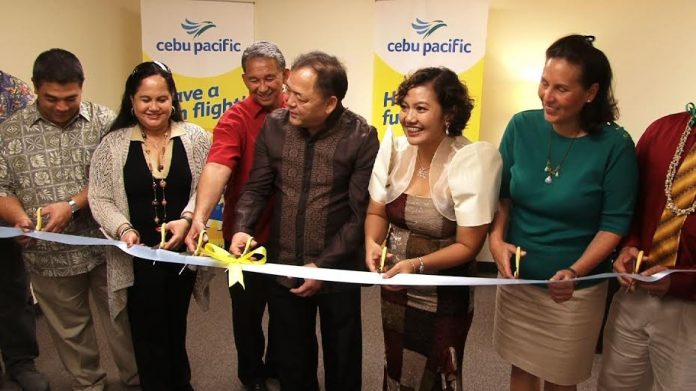 Guam – A new airline will be offering flights from Guam to the Philippines and it’s lower rates should make it extremely competitive. Cebu Pacific will launch it’s maiden voyage for it’s Guam/Manila route in March.

“The inaugural flight will be on March 15 of 2016,” said Cebu Pacific Wholesaler Emily Wallace. Cebu Pacific is known as an affordable carrier that the working class can afford. In fact it’s motto is “Any Juan Can Fly.” Wallace says, “The idea is not to take flights from other airlines or passengers from other airlines but to allow more people to fly which is what Cebu Pacific has been doing for 19 years now.” Wallace says the way they will allow more people to fly is by offering rates that are at least 40 percent lower than their competitors.

The Airline which is based out of the Philippines will be flying from Guam to Manila. They will be offering four flights a week on an Air Bus 320 which can hold up to 180 passengers. The exact days have not been finalized yet.

Wallace says Cebu Pacific has special promotions with even lower rates she says two weeks ago they offered flights from Manila to Sydney for $179 dollars. People won’t be the only thing that Cebu pacific is looking to carry to Guam. We will be moving a lot of fresh produce from the province of Mindanao to be here or from Baguio it depends what the government or Guam government would allow us to import,” said Cebu Pacific Wholesaler Edgar Hebrio.

To book flights on the new Airline email cebupacific@gmail.com or call 646-CEBU.