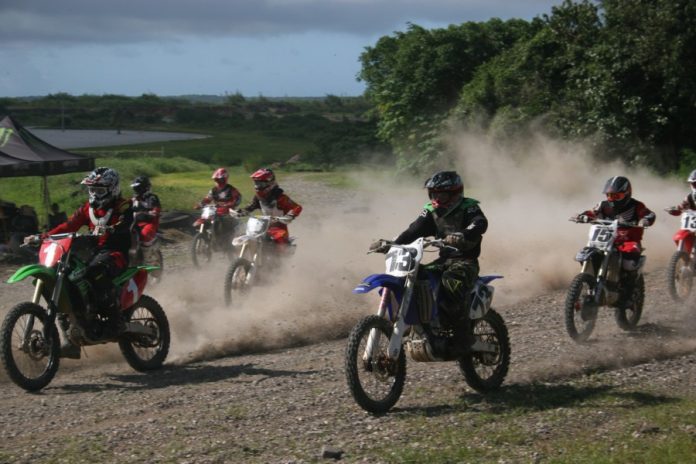 Yigo, Guam – The tenth round of the twelve round Monster Energy Guam Motocross Championships was held this past Sunday at the Guam International Raceway in Yigo. With another strong showing of family, friends, and fans Guam’s top motocross riders lined up for the tenth time this year for the start of their respective two and four wheeled classes.

The Open Motorcycle division this year has been dominated by the defending champion JR Cepeda and his Johnstone Supplies supported Cycles Plus Kawasaki. Cepeda for the eighth time this season took charge and left his competition in the dust adding round 10 to his list of victories and thereby numerically clinching both the Open Motorcycle division and 250cc division championships two rounds early. Placing second was Yamaha mounted Jacob Einloth with #98 Marshal Vawter jr in third also on a Yamaha. Rounding out the top ten respectively were #73 Gary Camacho Yamaha, #425 Brent Nulliner Honda, #19 Zachary Chang Honda, #927 Paul Castro Yamaha, #15 Matt Guzman Honda, #31 Tim Wenden Honda, and #13 Deven Manibusan Honda.

From the start to the finish the kids classes saw a heated tight elbow rubbing battle for positions. Jumping out to an early lead was defending Kids Open Minibike champion #14 Andrew Ignacio aboard his Yamaha with current points leader Honda mounted #17 Rowen Pereira right on his rear wheel. With Ignacio and Pereira battling for the lead a big battle for third had developed between #2 Stoney Bucek on a Cycles Plus Kawasaki, #77 Rollin Pereira also aboard a Kawasaki, #111 Ethan Manibusan on a Honda, and #12 Yuna Song the only female in the race. The pack fighting over third had by the mid point of the race added two more riders to the fight with both #11 Sasha Song and #8 Ethan Camacho getting right into the mix. Bucek was able to maintain the third place position with Rollin Pereira right behind him. Moving up quickly was #11 Sasha Song who with just several laps left had moved himself up behind the #77 of Pereira. Going into the final laps Ignacio pulled out with a rear flat tire allowing the #17 of Pereira to take over the lead. Bucek now had a comfortable second but then made a mistake and went down but was able to quickly recover although first allowing the rest of the field including the #11 of Sasha Song who had passed the #77 of Rollin Pereira to get within striking distance of Buceks position. At the checkers it was the #17 of Rowen Pereira taking the win with Bucek in second and Sasha Song in third. Rounding out the top ten respectively were #77 Rollin Pereira Kawasaki, #8 Ethan Camacho Yamaha, #111 Ethan Manibusan Honda, #12 Yuna Song Kawasaki, #88 Ry’niko Camacho Kawasaki, #25 Ethan Turo Kawasaki, and #50 Owen Turo Honda.

Rowen Pereira with 410 points extend his points lead over Bucek who holds 399 points to 11 points with just two more rounds in the Monster Energy Guam Motocross Championships yet to still be contested.

Round 11 of the 12 round 2013 Monster Energy Guam Motocross Championships will take place Sunday July 28th to be held at the Guam International Raceway in Yigo. The racing starts at 1pm with the admission being free to come out and watch. Special thank you to Bobcat Guam, GTR Motorsports, Cycles Plus, Kawasaki, Honda, Suzuki, RPM Yamaha, Hawaiian Rock, Smithbridge, DCK, Rocky Mountain Precast, and to all the GIRMAC volunteers for all their support.