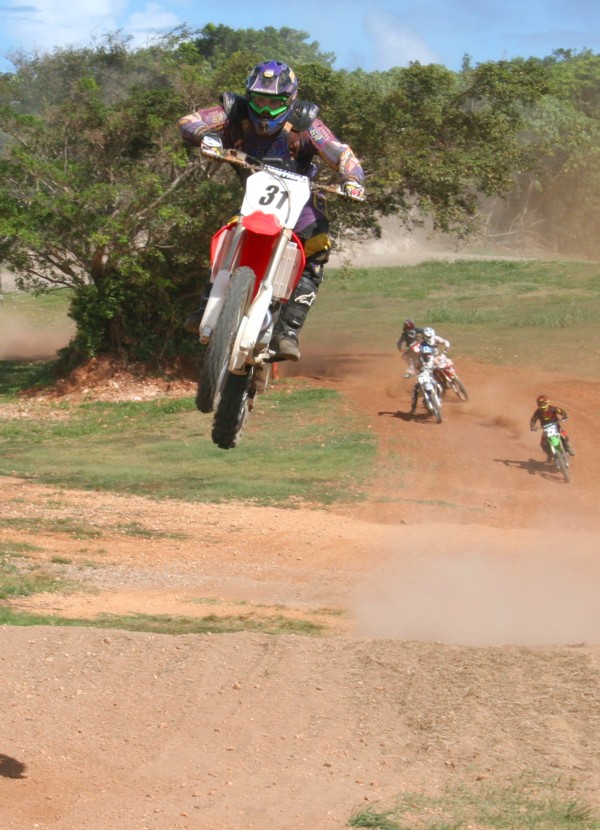 Guam – It was wild, tough and more than just a bit nasty Sunday during round six of the Monster Energy Guam Motocross Championships.

Round six marks the halfway point of the 2012 twelve round series and saw non-stop wheel to wheel battles in each of the several atv and motorcycle classes contesting along with plenty of drama from a challenging course.

It was free to the public to come out and watch out at the Guam International Raceway in Yigo with many folks taking advantage of the great weather by attending the event.

The course was dry, dusty, rough and nasty on both rider and machine having been left untouched as it was after last month’s grueling Shell V-Power Smokin’ Wheels.

Bumps were bigger, ruts were deeper and the dirt, having been baked by several weeks of sunshine with practically no rain, was like baby powder. Riders had to also contend at times with blinding roosts and clouds of dust. The course was the big challenge and for many during round six.  The course was biting, and biting hard, as riders were losing control and hitting the dirt. Machines were also finding the course a challenge with break downs and flat tires. The fun kicked off at 1pm and for some seemed to last forever.

Those on Guam who are insiders to the sport of motocross have all been doing a double take as 14 year old rookie JR Cepeda on his #42 Johnstone Supplies Kawasaki 250 has taken control of the Open Motorcycle and 250cc classes.  At the start with #31 Tim Wenden on a fresh off the showroom floor Honda taking the first heat of two holeshot or lead and #59 Caleb Barretto on the Cycles Plus Kawasaki on his heels the #42 of Cepeda slipped almost unnoticed into the third place position on lap one. On lap two Wenden lost control allowing Barretto to take the lead with Cepeda close behind in second. By lap three the fight was on as both Barretto and Cepeda had the elbows out and were leaning forward on the gas. Barretto was protecting the inside line which had slowed the pace just enough to allow Yamaha mounted #915 Anthony Ignacio to close up the gap on the two leaders. On lap five after a technical triple jump that leads into a left hand sweeper Barretto went wide and down allowing both Cepeda and Ignacio to get by and by lap ten Barretto had faded back to eighth because of a flat tire. At the finish of heat one it was Cepeda taking first, Ignacio second and Triple J supported Honda rider #33 Jake Jones in third.

Heat two saw Barretto grabbing the Shell V-Power Holeshot award and then within several laps fade back once again this time to sixth. Wenden the heat one early leader took the lead from Barretto for the first three laps but was soon engulfed by the battle that had developed behind him. Up front the young guns of Ignacio and Cepeda two riders who have been banging bars since their minibike days were going at it for the win with Wenden being quickly passed and relished back to third. Ignacio and Cepeda had the crowd screaming and on their feet as both riders were in a zone side by side and flying around the course. Several times it seemed as if Cepeda had the pass made on Ignacio but Ignacio showed grit as he would come back driving it in deep to regain the lead. Heading into lap seven of seventeen Cepeda held it open and let sail to take the lead through the double jump to double jump section located right in front of the main spectator stand. After that Cepeda held the lead to the finish taking the win and taking a ten point lead in the championships. Ignacio took second with Jake Jones in third. Rounding out the top ten were Yamaha mounted #3 Jacob Einloth, #31 Tim Wenden, #98 Frank Marshal Vawter Yamaha, #59 Caleb Barretto, #19 Zachary Chang Honda, #12 Devin Castro Yamaha, and #926 Gary Camacho Yamaha respectively.

Open Atv action saw a heated battle between #9 Ramon Torres on a Suzuki and #1 Robert Bucek aboard the Cycles Plus Suzuki with Torres getting the better of Bucek in heat one but with the wily vet coming back to take the win in heat two. Taking third was #43 Andy Painter also aboard a Suzuki who holds a 12 point lead in the championships. #73 Anthony Gumabon on a Yamaha took fourth with #22 Duce Romias on a Polaris rounded out the top five.

Kids Minibike was a two heat sweep by #14 Andrew Ignacio on a Yamaha as he led every lap of both heats to take the win and to take the lead in the championships. Taking second was #12 Stoney Bucek aboard a Cycles Plus Kawasaki with Yamaha mounted #71 Mathew Sandlin taking third. Rounding out the top five were #26 Paul Castro on a Honda and #13 Deven Manibusan on a Suzuki respectively.

Kids Mini Atv was also a sweep with #27 Marcus Manglona on a Docomo supported Apex battling his way through the pack to take the win in both heats. Taking second was #5 Janissa Torres on an Apex who leads the championships. #66 Jeric Johnson took third aboard his Drx. Rounding out the top five were #13 Bernabe Guerrero on his GTR Bobcat Guam supported Drx and #75 Jesse Leon Guerrero on a Drx.

450cc – #31 Tim Wenden broke in his new Honda by taking the win over second place finisher #19 Zachary Chang also aboard a Honda.

150cc Kids Minibike – Paul Castro took his #26 Honda to the win with #70 Edward Sandlin placing second on a Kawasaki.

85cc Kids Minibike – #14 Andrew Ignacio on his Yamaha dominated with #12 Stoney Bucek on the Cycles Plus Kawasaki placing second. Third went to #71 Mathew Sandlin on a Yamaha.

Kids 90cc Atv – Marcus Manglona aboard the #27 Docomo supported Apex took the class win with #5 Janissa Torres on an Apex in second and #66 Drx mounted Jeric Johnson in third.

The next round will be round seven of the Monster Energy Guam Motocross Championships and will be on May 20th in the Village of Malojloj with racing set to start at 11am. Round seven will be a part of the Malojloj Fiesta celebration and will be held on a small but very exciting course. Free to come out and watch. For more information visit AtvMotocrossGuam.com or contact the GIRMAC at 727-5381.