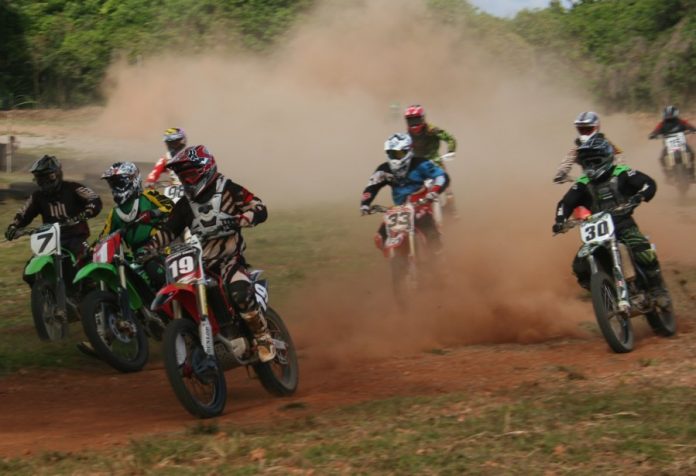 Yigo, Guam- This past Sunday afternoon the Guam International Raceway located in the Northern village of Yigo hosted great racing with the third round of the twelve round Monster Energy Guam Motocross Championships. Round 3 of the series was action packed and saw drama resulting a shuffling in the point’s standings as some riders fell as others battled upward towards the top of standings. Under beautiful sunny weather and a course that has seen it’s layout receive some much needed maintenance hard charging racers of all ages had a full day of close elbow rubbing racing in both motorcycle and atv classes.  Each class lined up and raced in two heats with overall round results being determined by combining the results from both of the two heats.

Open Motorcycle
In the premier motorcycle class defending champion JR Cepeda supporting his earned #1 plate aboard his Johnstone Supplies supported Kawasaki jumped out to an early heat one lead. Cepeda was being followed closely by New Zealand transplant #31 Tim
Wenden aboard his Rocky Mountain Prefab supported Honda who was early on putting intense pressure on the leader Cepeda. Current points leader and former champ #99 Caleb Barretto on his Suzuki was running a close third but went down hard and in spectacular fashion resulting in his withdrawal from the event. The two front runners of Wenden and Cepeda eventually pulled away from the rest of the field to battle for the heat one win with Cepeda able to withstand the pressure to go on to take the heat win. Wenden had to settle for second in heat one with #33 Jake Jones aboard a Triple J supported Honda taking third.

At the start of heat two the #31 Honda of Tim Wenden seemed to have been blasted off as he was launched into the lead with this time JR Cepeda aboard his Kawasaki in the cat birds seat putting the pressure on the leader. The two put on an electrifying show as they aired it out over the many double jumps and big table top jumps at times just inches from one another. The two left it all out on the track with neither rider willing to let up on the intensity which had drove the fans and supporters lining the course wild. At the checkers it was Wenden over Cepeda with the heat two win. #33 Jake Jones who was running a smooth and virtually unchallenged third cruised in for another third place heat finish. #3 Jacon Einloth placed fourth on a Yamaha with #7 Jonathan Lizama rounding out the top five on a Kawasaki.

With his two one heat finishes Tim Wenden and his Rocky Mountain Prefab supported Honda takes the round overall win with Cepeda taking second and Jones placing third overall. With the withdrawal of Barretto due to his mishap Cepeda assumes the lead in the Open Motorcycle class standings with 137 points over Jake Jones who now sits in second with 120 points and #30 Gary Camacho in third with 97 points.

In the Open Atv class #9 Ramon Torres on his Torres Racing Suzuki dominated the heats sweeping the class with reigning class champion #1 Robert Bucek aboard the Cycles Plus Suzuki having to settle for second. Last weeks Umatac Discovery Day Champion #88 Ray Manibusan placed third aboard his Yamaha. Manibusan still has a big lead in the point’s standings with 129 points over Bucek who has 80 points. Honda mounted Marcus Guerrero sits in third in the standings with 67 points.

Open Minibike class
#17 Rowen Pereira was unstoppable aboard his Honda and cruised to an easy round three win over #7 Stoney Bucek who took second aboard the Cycles Plus Kawasaki and #77 Rollin Pereira also on a Kawasaki in third. Rowen Pereira holds the Open Minibike class points lead with 144 points to Yamaha mounted #29 Ethan Camacho who sits in second with 125 points. Rollin Pereira holds third in the standings with 110 points.

Open Kid Mini Atv
#1 and defending champion Janissa Torres on her Apex had a perfect heat one taking the win by leading wire to wire with #6 Collin Ray Cruz on a DRX taking second for that heat. Heat two was not as generous for the defending champion as Collin Ray swept
through the first turn full throttle to take the heat two lead with Torres in pursuit. Collin Ray was on the gas and able to inch away gradually from his pursuers with Torres having a mechanical failure resulting in being unable to finish. With Torres out due to a
mechanical failure #99 Victoria Clark stepped it up aboard her Apex to take second. At the the finish it was Collin Ray Cruz with the heat win and the round overall. Victoria Clark took home second with #9 Vincent Woodrom placing third.  Collin Ray Cruz extends his points to a 22 point lead over Janissa Torres with 141 points over Torres who has 119. Victoria Clark sits in third with 106 points.

450cc Motorcycle class saw #31 Tim Wenden take the win with #7 Janathan Lizama taking second and defending class champion #19 Zachary Chang on his Honda placing third. Defending champ Zachary Chang with a 114 points holds a slim two point lead in
the 450cc class points standings over Honda mounted #15 Matt Guzman with 112 points.  #99 Caleb Barretto who had been the points leader heading into round 3 falls to third in the standings with 100 points.

250cc Motorcycle class was JR Cepeda as he dominated the class. Taking second was #33 Jake Jones with #3 Jacob Einloth in third. Cepeda leads the 250 class standings with 144 points over Jones who holds second with 138 points and #30 Gary Camacho sitting now in third with 114 points.

In the 85cc Mini Bike class #7 Stoney Bucek on the Cycles Plus Kawasaki had a break out race to take the round win over second place finisher #77 Rollin Pereira also aboard a Kawasaki and #111 Ethan Manibusan on a Honda who placed third. #29 Ethan Camacho on his Yamaha still holds the 85cc class points lead with 138 points over Rollin Pereira in second with 124 points. Ethan Manibusan holds third with 122 points.

Just another round sweep for the #88 Kawasaki of Ry’niko Camacho in the 65cc Minibike class which also saw #25 Ethan Turo take second and #11 Sasha Song place third. Camach0 joins his brother Ethan by being on top of their respective class points
standings with 150 points over Turo in second with 132 points and Song in third with 120 points.

Round 4 of the 12 round 2013 Monster Energy Guam Motocross Championships will take place Easter Sunday March 31st to be held at the Guam International Raceway in Yigo. The racing starts at 1pm with the admission being free to come out and watch. Also a special thank you to Bobcat Guam, Pine Rental, GTR Motorsports, Cycles Plus, RPM Yamaha, Hawaiian Rock, Smithbridge, DCK, Chang and Torres family, and to all the GIRMAC volunteers for all their support.