After losing a tight first set, Cepeda and Sinclair came back strong in the next set, jumping to a commanding 5-0 lead. The pair had a chance for the set shut out on Vakil’s serve after forcing deuce, but Sinclair’s service return hit the net to give their opponents the game. Later, Vakil and Lagman rode on their opponents’ errors to break Cepeda’s serve to continue to stay in the contest. With the game score at 30-30 on Lagman’s serve, a Vakil volley error proved costly, setting up set point for Cepeda and Sinclair. Lagman’s ensuing double fault forced a third, deciding set.

“After we lost the first set, we went into the second set with a mindset of ‘go for it’ and ‘don’t give up,’” Cepeda said after the match. “We just had to go in and keep fighting for points and not think we were going to lose.

“After winning the second set, we went into the third set feeling confident. We had the momentum going in, and we wanted to keep it to finish out the match,” added the 16-year-old incoming junior at Father Duenas Memorial School.

[Guam’s Joshua Cepeda sends a backhand volley to opponents Neishit Vakil of India and Jacob Lagman of the Philippines as partner Colin Sinclair looks on during a doubles match of the 2013 Lacoste GVB Futures tennis tournament at the Hilton Guam Resort & Spa tennis courts. Cepeda and Sinclair defeated Vakil and Lagman 5-7, 6-2, 10-6 to reach the quarterfinals.]

Cepeda and Sinclair earned match point at 9-6 after Lagman netted his smash attempt. After a short rally in the next point, Cepeda powered in an overhead shot to Vakil, who returned it high for Sinclair to put away for good with a smash to end the contest.

Cepeda and Sinclair next face No. 3 seed Gengo Kikuchi and Shunrou Takeshima of Japan in the doubles quarterfinals on Court 2 after the first 10 a.m. singles match.

Sinclair, who was born in Saipan and lived on the neighboring island until he was 10, didn’t fare as well in the singles draw, losing to the United States’ Patrick Davidson 3-6, 4-6. 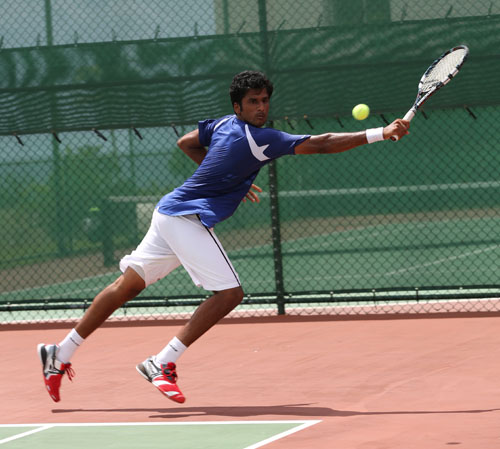 [Top-ranked Saketh Myneni of India extends for a backhand return to to Japan’s Jun Ito, a finalist in the 2011 tournament, during Round 2 of the 2013 Lacoste GVB Futures tennis tournament at the Hilton Guam Resort & Spa tennis courts. Myneni defeated Ito 6-3, 6-4 to advance to the quarterfinals.] 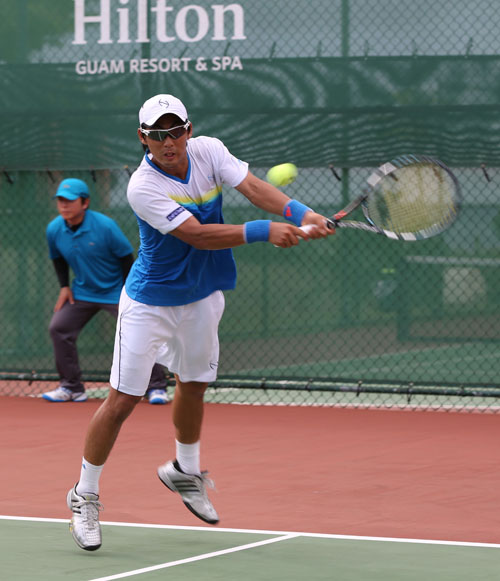 [No. 7 Bumpei Sato of Japan plays a backhand return to Guam’s Daniel Llarenas during Round 2 of the 2013 Lacoste GVB Futures tennis tournament at the Hilton Guam Resort & Spa tennis courts. Sato defeated Llarenas 6-3, 6-3 to advance to the quarterfinals.]

In doubles action, No. 4 Katsuki Nagao and Hiromasa Oku of Japan defeated compatriots Soichiro Moritani and Ren Nakamura 6-2, 6-2, No. 3 Kikuchi and Takeshima advanced with a 6-4, 6-4 win over Jun Ito and Hayato Matsuda, and Korean duo Jun and Song won 6-4, 6-0 against Langley and Japan’s Yu Takashi.

Following the matches, special guest and former No. 12 Dominik Hrbaty held a special tennis clinic for Guam’s youth national tennis players preparing for the upcoming North Pacific Qualifier. Hrbaty also will be holding a tennis clinic beginning at 5 p.m. Wednesday for all interested youth players, and another tennis clinic at 6 p.m. for adults. All are welcome to join.

The tournament’s updated order of play and drawsheets are available for viewing or download from facebook.com/GuamFutures. Updates are also available by following @GuamFutures on Twitter.