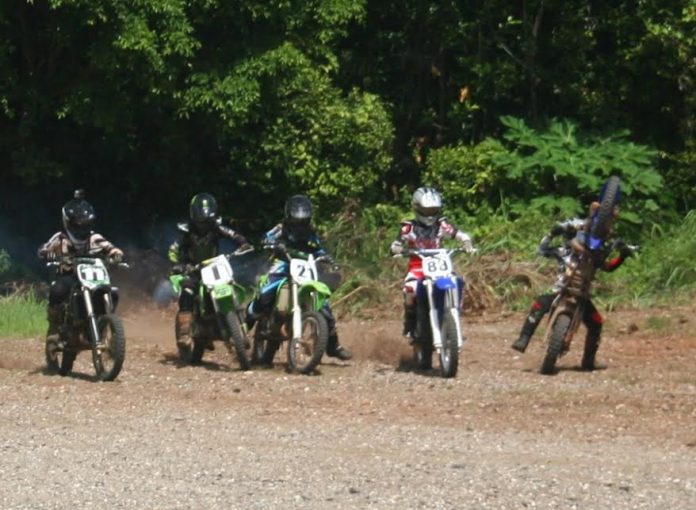 Yigo, Guam – Round 3 of the fifteen round 2014 Monster Energy Guam Motocross Championships was held this past Sunday March 16th at the Guam International Raceway.

Many of the round 3 participants were using the event to start preparing themselves for the upcoming Guam Smokin Wheels Weekend happening from April 11th through the 13th at the Guam International Raceway.

The Guam Smokin Wheels Weekend will see motorcycle and atv classes racing in both motocross and endurance events against off island riders from New Zealand, Philippines, and Japan.

Round 3 of the Monster Energy Guam Motocross Championships kicked off the racing at 1pm under clear skies and on a rough and rugged course and introduced a new class of vehicles to its list of classes competing. The new UTV Trophy Cart class ran a 15 minute heat over a portion of the motocross course and a portion of the offroad course.

[Photo: Riders at the start of the mini bike. Photo courtesy of Robert Bucek.]

In the Open Motorcycle class #31 Tim Wenden took an early lead aboard his Rocky Mountain Precast Honda over reigning two time Guam champion JR Cepeda on the #1 Cycles Plus Kawasaki. The two mixed it up with Wenden fresh back from a shoulder injury able to maintain the lead for the first half of the heat before cepeda was able to muscle by into the lead. At the checkers of heat one of two Cepeda took the win with Wenden taking second. #33 Jake Jones placed third for heat one.

In heat two it was all JR Cepeda who led nearly every lap to the checkers. Taking second was #33 Jake Jones on his Triple J supported Honda with #59 Caleb Barretto placing third.

Overall in the Open Motorcycle class the #1 Cycles Plus Kawasaki of JR Cepeda takes the round win and thereby extending his lead in the championship. Taking second for the round was #33 Jake Jones with #59 caleb Barretto on a Cycles Plus Honda placing third overall for the round. Rounding out the top ten overall were 4th #3 Gary Camacho Yamaha, 5th #100 Steven Turo Kawasaki, 6th #420 Kim Aiken Kawasaki, 7th #15 Matt Guzman Honda,  8th #94 Deven Manibusan Honda, 9th #19 Zachary Chang Honda, and in 10th #31 Tim Wenden Honda who had sat out of the second and final heat.

In the Open Atv class #1 Robert Bucek aboard the Cycles Plus Suzuki and Jose Simpson who was on the #45 Suzuki rode the track up front with Simpson was just returning after a year off from racing using the race as a practice to get himself back into race shape. The two up front traded the lead multiple times in heat one while both looking smooth. At the checkers of the heat one of two it was Bucek first Simpson second and #11 John Gilman in third.

In heat two Bucek took the Cycles Plus Suzuki straight up to the lead and went unchallenged to the finish with Simpson taking another second and #66 Jeric Johnson placing third.

Overall in the Open Atv class Bucek took first, Simpson second and Jeric Johnson third. John Gilman took fourth while #55 John Johnson on a Kawasaki finished fifth to round out the to five.

In the Open Minibike class 9 year old #11 Sasha Song on a Kawasaki took the heat one of two win but had to battle with #88 RPM Yamaha mounted Ethan Camacho who had taken the lead from the start. Taking second was the defending class champion #1 Stoney Bucek on the Cycles Plus Kawasaki who had moved past the #88 of Ethan Camacho. Also getting by the #88 was the #8 RPM Yamaha of Ry’niko Camacho who took third in the heat.

In heat two the #88 of Ethan Camacho once again took the early lead this time with a pack of hungry for the win contenders biting at his rear wheel. First to try to make the move was the #8 of Ry’niko Camacho who then left the door just open enough to allow the #11 of Sasha Song to take the second place position. Song then waisted no time and went right after the leader Ethan resulting in the two getting together with Song hitting the dirt. With Song taking a dirt sample both Ry’niko and Bucek moved up into second and third respectively. Ry’niko poured on the throttle and put the pressure on the #88 leader Ethan Camacho and after several laps made the pass to take the lead which he would not relinquish all the way to the finish. Bucek was the next rider to get by the early leader to take another second. Ethan Camacho held on to take third with the youngster Sasha Song placing fourth for the heat.

In the Open Kids Mini Atv class #10 Tori Clark swept both heats on her Apex 90 to take the round win with #7 Darian Chang on a DRX taking second, #74 Damian Manibusan third. #6 Zion Manibusan took a fourth.

In other class results:

Next up will be round 4 of the Monster Energy Guam Motocross Championships on Sunday March 30th at the Guam International Raceway in Yigo. Gates will open at 8am with racing set to kick off at noon. Spectators will be welcomed and there is no fee to come out to watch the racing. For more information visit http://www.AtvMotocrossGuam.com or call the Guam Racing Federations Public Information Officer at 727-5381.