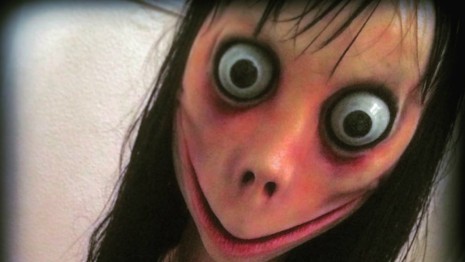 Guam – This past week, several posts from worried parents and guardians have been circulating on social media, raising concerns about the Momo Challenge, an interactive online game that entices children to harm themselves or others.

The Momo Challenge is designed to get children to interact with a character called Momo through messaging platforms such as Whatsapp and Facebook. References to the challenge have allegedly popped up on YouTube videos featuring Peppa Pig and Fortnite.

The challenge involves Momo, an anonymous figure, enticing the impressionable users to perform a series of violent tasks, ranging from assault to suicide. Refusal to do any of the tasks entails a threat from Momo.

These threats are usually accompanied by gory images or photos of Momo, usually depicted as a grotesque female figure with wide eyes, a slit-like mouth and bird legs.
Sgt. Paul Tapao of the Guam Police Department was notified of the challenge by worried parents.

“I’m a part of various neighborhood watch group chats. Some of the social media platforms such as Whatsapp, Facebook, you know, have been brought to a lot of attention, advisories and that’s really a testament that parents are out there sharing that information,” Tapao said. “Understanding that, it’s conveying it out to the house that, “hey look, this is what’s going around. Make sure that you guys aren’t following this.”

While it has gained traction within the past week, actual verified accounts of children coming across the Momo Challenge are rare.
Tapao said the Guam Police Department has not received any reports of incidents concerning the challenge.

Concerns about the challenge have reached international attention. According to the Buenos Aires Times, the challenge may be linked to the suicide of a 12-year-old girl from Argentina.

In response, police in the UK as well as the Department of Education in Hawaii have issued warnings about the challenge, urging parents to be cautious about what their kids watch.
However, online challenges encouraging dangerous behavior is not a new phenomenon. A few years ago, a similar challenge called the Blue Whale Suicide Game, urged teenagers to commit suicide.