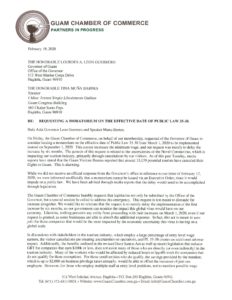 The Guam Chamber of Commerce is asking the governor to call a special session and introduce emergency legislation to postpone the implementation of the 50-cent hike in the minimum wage scheduled to take effect next month.

Governor Lou Leon Guerrero had already said no to the Chamber’s weekend request, asking her to declare a moratorium on the increase until September 1.

The governor said her hands are tied.

A public law, duly passed by the legislature and signed by her, requires the increase to take effect on March 1 when the current minimum wage will rise from $8.25 to $8.75 per hour.

Chamber Chairwoman Christine Baleto told the Pacific News Center she understands the governor’s position but the need to delay the increase is critical given the growing number of tourists canceling their reservations because of their concern about the coronavirus outbreak.

“The minimum wage increase is an increase in expenses for a business. So just logically, when you have revenue that’s decreasing, you have to cut costs in order to survive. And in some cases, we’re already seeing businesses reduce their hours to try and manage their expenses,” Baleto said.

She added: “When talked to the hotel industry, they’re saying they’re not quite feeling the effect right now because we have some military activity going on that’s making up for it. But everybody is expecting that by April this is going to hit. So if we implement a minimum wage increase in March and then we have this huge impact to revenue in April, they’re going to have to adjust. I mean you have to make it up someplace.”

The Chamber sent another letter to the governor today asking her to call a special session to consider emergency legislation postponing the implementation of the minimum wage increase by six months.

The delay is aimed at saving jobs that will be “most impacted by the economic uncertainties” the coronavirus is having on a global scale, states the Chamber letter.