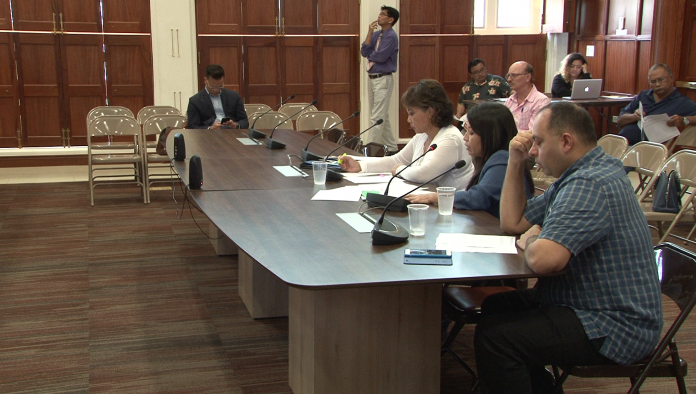 Guam – The Guam Chamber of Commerce and the Guam Hotel and Restaurant Association testified in opposition to Speaker BJ Cruz’s bill 20 which proposes a minimum wage increase. However, Citizens for Public Accountability member Ken Leon Guerrero testified today(Weds.) in favor of the increase.

“I believe that no one that works a full-time job should have to live in poverty. Our office has done some research and determined that there are 34 thousand people on Guam who have completed a bachelor’s degree a graduate degree or vocational training. Nearly half of Guam’s entire private sector workforce still makes less than ten dollars and ten cents an hour. So, it’s not an issue of education with the 65 thousand people that are working,” said Speaker Cruz.

The Speaker says that according to an independent economic impact study Guam’s gross domestic product increased, the workforce expanded and the inflation rate declined after the last minimum wage increase. Cruz’s bill 20 proposes two more increases one to $9.20 an hour by October 1st of 2017 and the second to $10.10 by October 1st, 2018.

Citizens for Public Accountability member Ken Leon Guerrero testified in favor of the minimum wage increase saying Guam’s young adults are leaving the island for better opportunities abroad. “They are moving there because there they can get the quality of life they can get a higher income in those states with a lower cost of living and that’s because the cost of living on Guam for the past few years has increased dramatically the living wages have not,” said Leon Guerrero adding, “The cost of living over the last few years has gone up well over 30 percent and for years the excuse was the price of oil. Well, since 2014 the price of oil has dropped below 60 dollars a barrel and right now it’s bouncing under 60 dollars a barrel so that really doesn’t hold water anymore. But what’s really, what I find interesting is we didn’t see any prices go down when the price of oil went down with the possible exception of gas and it didn’t go down by very much”

This afternoon(Weds.) the Guam Chamber of Commerce and GHRA testified in opposition to the measure. “GHRA remains steadfast in its belief that the legislature of Guam should be creating laws to help grow the economy and not suppress or inhibit growth by increasing the cost of doing business through increased wages taxes fees and additional government regulations,” said GHRA President Mary Rhodes. Rhodes told lawmakers that most of their members did not participate in the economic impact study and thus they are questioning the accuracy of the results. Nevertheless, GHRA is offering alternatives.

The legislature is holding three hearings on the bill today (Weds.). One at 9am one at 2pm and the final one at 6pm.