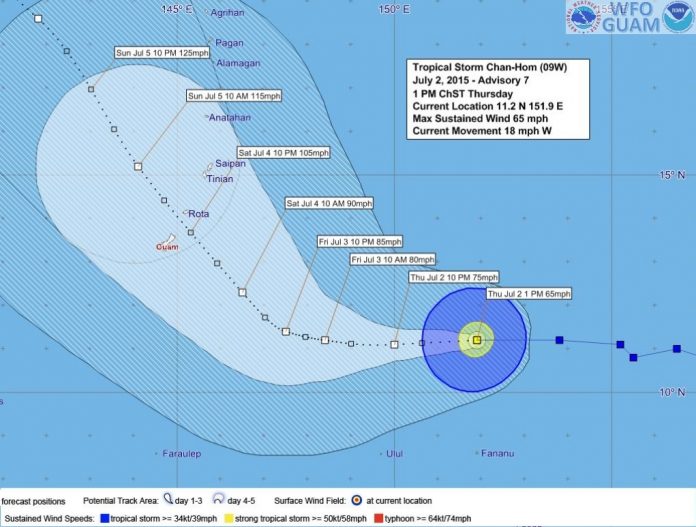 Guam – Tropical storm Chan-Hom could turn into a typhoon overnight and as of now it’s still heading in the direction of the Marianas. Earlier today the Governor declared Guam in COR3 here’s more.

This means that tropical storm Chan-Hom will pass through the Marianas anytime between Saturday evening to Sunday morning. “Probably later tonight or sometime early Friday morning it could reach typhoon strength so that would be 74 miles per hour or greater,” said Aydlett.

The latest forecast track has it passing through the Rota channel just North of Guam and just South of Rota but the exact track and intensity is hard to predict. “The biggest question is how is how are the tropical storm and the circulation near Chuuk it’s a weakening circulation how are they going to interact? Basically the weakening circulation will tend to keep the tropical storm moving along the Westward heading, could drop it just a little bit South of West but eventually when the two circulations have merged then we’ll start seeing that Northwest turn and that will bring tropical storm possibly Chan-Hom through the Marianas,” said Aydlett.

That being said when it passes through the Marianas they are expecting it to be a category two typhoon with 105 mile per hour winds. “All the residents of the Marianas should closely monitor this situation. Yesterday the track had Chan-Hom coming South of Guam now it’s passing just South of Rota so basically nobody’s off the hook on this storm,” said Aydlett.