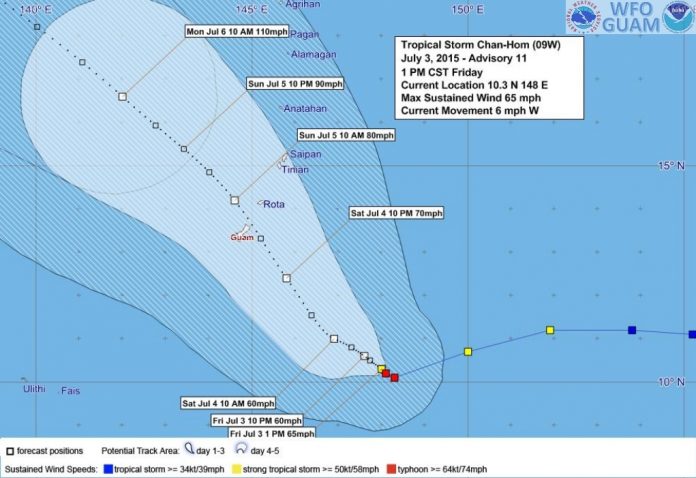 Guam – Tropical storm Chan-Hom continues to weaken but it could re-intensify back up to a typhoon by Saturday.

Over Thursday night tropical storm Chan-Hom intensified and by early this morning (Fri.) it was a typhoon. However by 11am it had turned back into a tropical storm decreasing in intensity slightly from 75 miles per hour down to 70 miles per hour which is four miles per hour below the threshold. Then by 2pm it weakened in intensity further down to 65 miles per hour and as of 5pm it’s winds were at 60mph. NWS forecaster Ken Kleeschulte says it’s expected to decrease further over the next 12 to 24 hours. “But eventually it’s expected to turn to the Northwest pick up a little speed and strengthen again as well. But it could still pass Guam and the Marianas early Sunday morning. We’re looking right now latest forecast track has it coming through about 6am as a minimal typhoon,” said Kleeschulte.

Kleeschulte says that the track and intensity is extremely hard to predict. “There are a lot of factors. The biggest thing is there is an unprecedented monsoon trough that is through the area and all through the South and it’s way stronger than it should be this time of year and it’s all a lot of things due to the el nino that we are having this time of year,” said Kleeshculte.

Either way GovGuam officials are urging the public to be prepared. “During condition of readiness three concentrate on preparedness some of the tips that we at the office of civil defense have put out to the residents is to put up your shutters pick up objects that heavy winds can move around your yard and store them. You also want to make sure that you have emergency storm preparedness kits in place that are easy to get to,” said Guam Civil Defense Administrator Charles Esteves.

“I think the main message here is for folks to keep vigilant to get the information from the necessary sources on the progress of this storm,” said Governor Eddie Calvo.

Again the National Weather Service says that the forecast track and intensity of Chan-Hom is extremely difficult to gauge there are just too many variables involved and too many things that are affecting the development of the storm. Both NWS and GovGuam officials say the bottom line is it is safest to be prepared for a typhoon.