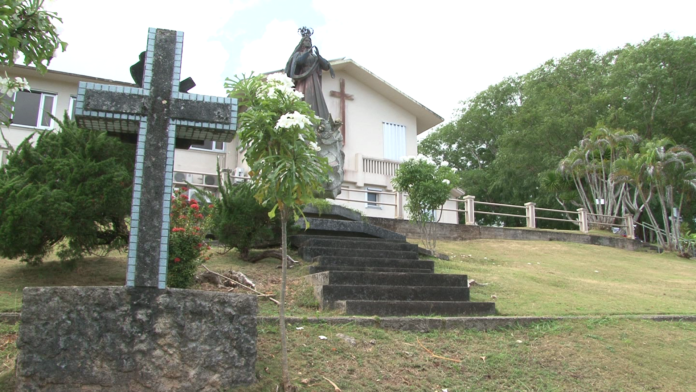 Guam – The Archdiocese of Agana has confirmed that the Chancery Office will be put up for sale in anticipation of what will likely be millions of dollars in settlement money for the scores of sex abuse victims at the hands of the church.

It’s a historic piece of property that was built after World War II.

“This announcement is really kind of historical. Over 70 years of the chancery and the bishop’s residences has been located here,” said Archbishop Michael Byrnes.

First was Bishop Baumgartner, then Archbishop Flores before former Archbishop Anthony Apuron would take the reins for three decades and now the ownership will end with Archbishop Byrnes.

“Today, I wish to announce that the chancery offices and the bishop’s residence will be relocated and put up for intended sale of the whole chancery property located here on San Ramon Hill in Hagatna,” announced Byrnes.

So what’s the asking price?

The archbishop says some 25 employees, the pastoral offices and the bishop’s residence will all be moved in September which is around the time mediation is expected to take place for the 150 lawsuits filed against the Archdiocese of Agana.

The church seems to have picked up its pace in recent days since the announcement by a Vatican Tribunal finding Archbishop Anthony Apuron guilty of certain accusations stemming from sexual abuse of minors dating back to the 70s.

A few days after the historic announcement by the Vatican, a hearing was held in federal court where a mediation date was set for Sept. 17, 18 and 19.

Archbishop Byrnes talked about the historical value of the property.

While that aspect could certainly add value to the already lucrative property, the Chancery, particularly the bishop’s residence, is also a place fraught with painful memories for some.

Mark Apuron, the nephew of Bishop Apuron and one of the accusers who lodged a sex abuse claim against his uncle, says it was at the Chancery where his uncle raped him.

You can read more from the Archdiocese below:

The Archdiocese of Agana wishes to announce the relocation of Chancery offices and the intended sale of the Chancery property located on San Ramon Hill, Hagatna.

The offices and workers currently located at the Chancery will relocate to the Dulce Nombre de Maria Cathedral-Basilica grounds in Hagatna.

The move is part of archdiocesan-wide efforts related to the liquidation and sale of church property on Guam in the midst of challenging financial times and settlement of clergy sexual abuse cases.

Now that the mediation process related to the sexual abuse lawsuits has been set for September, the archdiocese is in the process of evaluating these claims on an individual basis. This necessitates the selling of certain properties owned by the archdiocese.

We anticipate that the relocation of Chancery offices will take place in September. We will update the public as the matter further develops. Thank you.

Addendum, after the news conference

Official records indicate that the Chancery property on San Ramon Hill was acquired as a gift from the Estate of Henry Flores Nelson in 1950.

One of the most significant aspects of the Chancery property is tied to the historic visit to Guam of Pope John Paul II in February 22-23, 1981.  Now Saint John Paul the Great stayed overnight at the residence of then Bishop Felixberto C. Flores at the Chancery during his two-day visit to the island 37 years ago. It was the first and still the only visit to Guam by a pope.

The offices of the Archbishop, Vicar General, Chancellor, and Vicar for Church Patrimony are all located at the Chancery. Other offices and functions that comprise the Chancery include: Catholic Education, Archives & Records, Marriage Tribunal, Finance, Human Resources, Safe Environment, Communication and the Umatuna Si Yu’os newspaper.

Archbishop Byrnes’ residence is located on San Ramon Hill across Chancery offices. The site of its relocation is still being evaluated at this time.