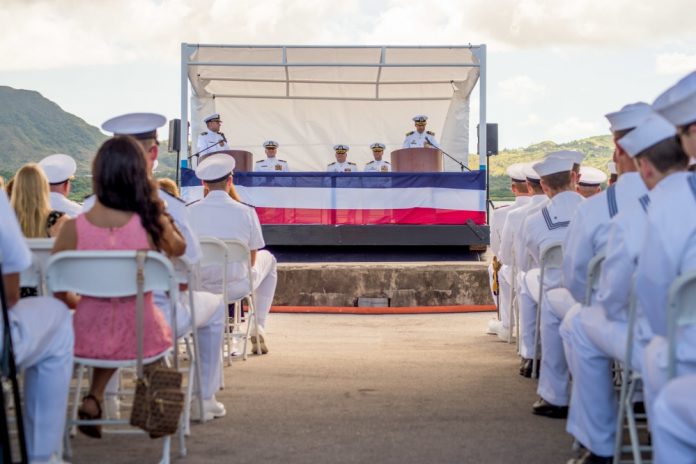 Capt. Tim Poe, Commander, Submarine Squadron Fifteen, was the guest speaker for the ceremony. He congratulated Hill on an outstanding job during his tenure.

“Rest assured that you have just completed one of the most challenging jobs in the Navy,” said Poe. “Your can-do attitude and track record of always meeting your milestones and commitments has set a new standard in Guam.”

Poe went on to say that he could always rely on Hill and the crew of Key West to rise to any challenge. Following his speech, Poe presented Hill, a native of Austin, Texas, with a Meritorious Service Medal for his tenure as commanding officer.

As Hill took the podium for the last time, he spoke to the crew of the Key West.

“Your unwavering enthusiasm, devotion to duty, and commitment to each other is awe inspiring,” said Hill. “From my first moment on board Key West, I could feel the pulse of excitement and esprit de corps that runs through the crew. It’s invigorating and I absolutely love it!

He continued his message to the crew by explaining the ship’s motto: Libertate Clavis Tenacitas Et Ingenuim.

“The key to freedom is tenacity and resourcefulness,” said Hill. “The crew, chiefs, and officers of Key West fully embody these character traits. Never giving up in the face of adversity of overwhelming odds. Always looking for an alternative, viable solution to the most difficult challenges.”

Hill is scheduled to report to the Chief of Naval Operations Staff in Washington, D.C. as his next command.

“I am here to fight with you, and alongside you,” said McGuire. “As the first millennial captain of USS Key West, I know that we are all part of the strongest generations to serve our fine country. We have not dealt with just the threat of war, but have dealt with a generation of war. We all our stories of what brought us here, but today we stand in unity. We stand ready to fight and we stand poised on the front lines ready to face our adversaries.”

McGuire is a 2003 graduate of Bucknell University. He holds a Bachelor of Science in Chemical Engineering and a Bachelors of Arts in Economics. He received his Masters of Business Administration in Financial Management from the Naval Postgraduate School.

Key West is one of four Los Angeles-class fast attack submarines assigned to CSS-15, which is located at Polaris Point, Naval Base Guam in Apra Harbor, Guam. The squadron staff is responsible for providing training, material and personnel readiness support to these commands. Also based out of Naval Base Guam are submarine tenders USS Frank Cable (AS 40) and USS Emory S. Land (AS 39). The submarines and tenders are maintained as part of the U.S. Navy’s forward-deployed submarine force and are readily capable of meeting global operational requirements.