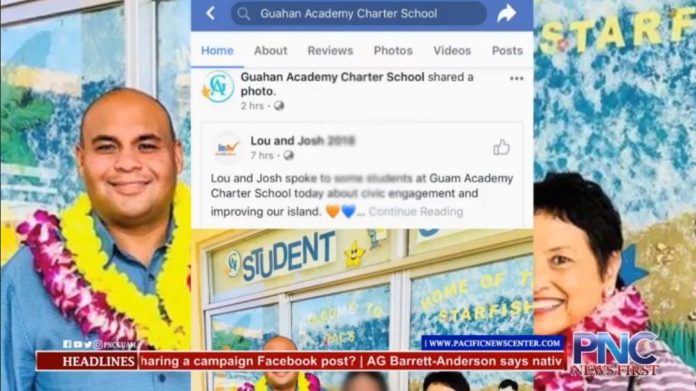 Guam – The Guahan Academy Charter School is again in hot water. The “I’m in” campaign visited the school yesterday and subsequently posted a picture on their campaign Facebook page. Later on that day, the Leon Guererro-Tenorio post was shared by the Guahan Academy Charter School Facebook page. If this were a GovGuam agency sharing the post, this would be a clear violation of Guam’s Mini-Hatch Act.

The charter school, being a private entity, is 100% funded by GovGuam tax dollars. Their website states that “employees are expected to adhere to high standards of professionalsm and ethical conduct in carrying out their duties. This includes avoiding conflicts of interests and commitment.” Under its policy for information technology, it stated that “it is important for all users to behave in a responsible, ethical, legal manner.” Which then begs the question, is it ethical or even legal, for tax dollars to be used to advance a specific campaign.

PNC reached out to Dr. Won Pat, the Chief Administrative Office of the charter school.  Won Pat was unaware of the posting as she was out due to a personal emergency. She stated that while ignorance of the law is not an excuse, she will ensure that the post is taken down. She further stated that while she was Speaker of the legislature, she herself was invited numerous times to speak to civics classes. “Political candidates (senatorial and gubernatorial) are always invited to speak to students and/or participate in forums” said Won Pat.

As of 11:30 this morning, the Facebook post had been taken down. While the “I’m in” campaign was invited to speak yesterday, it was not until PNC brought this up to Won Pat’s attention, that the BOTA campaign was then subsequently invited.  At 1:52 this afternoon, Won Pat confirmed that she had instructed the teacher to invite the BOTA campaign.

The post had raised concerns online last night. Today, the BOTA campaign released the following statement:  “Like others, the BOTA campaign is concerned that the Guahan Academy Charter School, which receives public funds and enrolls public school children, is showing partisanship here. It is questionable that leadership at the school would allow the sharing of partisan political posts, from a political page, onto their official school Facebook page.  We certainly hope this is a staff error on their part and that our candidates will be afforded the same invitation to speak. In the meantime, the concern has been sent to the property authorities for review.”

PNC also reached out to the Pete Calvo, the Executive Director of the Civil Service Commission. Calvo stated that in order for the CSC to investigate the allegations, a concerned individual would first need to file a formal complaint. After doing so, the CSC would then be able determine whether or not it had the jurisdiction to investigate.