Guam – Culinary Arts students at Guam Community College are the recipients this week of an extensive collection of cookbooks from around the globe.

The contributor is none other than one of GCC’s mentor chefs and the former executive chef at the Hyatt Regency Guam, Chef Josef Budde. He recently retired from the Hyatt Guam after two years as executive chef here and 30 years total with the Hyatt. Budde’s entire culinary career spanned over four decades, during which he created delectable gourmet dishes in his native Germany, in France, other European countries, and in Japan, Hong Kong, and Thailand, among other places. Budde either purchased or acquired a cookbook in each locale, and on Wednesday August 14, he brought the first part of his unique collection to GCC.

“These young people, they’re going to be the future of culinary in Guam,” said Budde. “It’s our obligation to pass on our experience and our knowledge to them,” Budde said.

Budde reserved one special book for his friend, GCC Chef Paul Kerner – a tattered, 1840 edition of “The Century Cookbook and Home Physician.” He bought the book at a flea market in Houston, Texas, but thinks it originated in Pittsburgh, Pennsylvania, “because all the handwritten notes appear to be from Pittsburgh,” he said. The book contains a handwritten recipe for “Pork Bake,” and remedies for 1840 ailments such as “intoxication.” Budde pointed out that the book also has tips on how to, for example, “curl hair.”

“This is an awesome collection for our students,” said Chef Kerner. “These books are snapshots in time of what the food industry was highlighting during a particular period. We are so grateful to Chef Budde for donating this valuable resource for our students.”

Chef Budde will continue to be a guest chef lecturer in GCC’s Culinary Arts program. 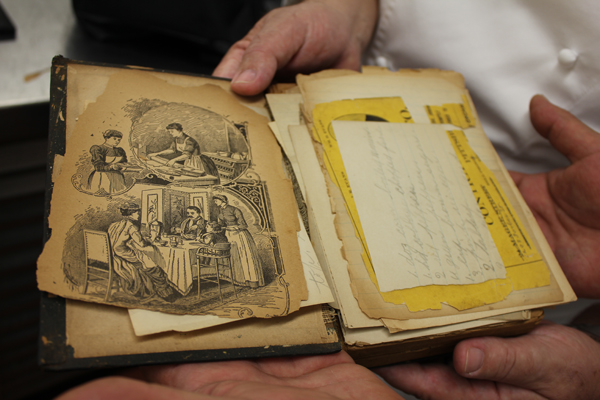 [Chef Budde gave Chef Kerner this 1840 edition of “The Century Cookbook and Home Physician” that he bought at a flea market in Houston Texas.]