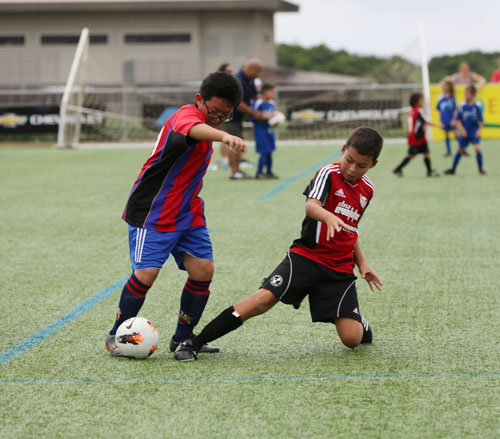 In the U12B division, a goal by Kidman Carriaga in the final second of play prevented a Paintco Strykers loss to the Wings FC and forced a 2-2 draw by the final whistle.

The Wings FC held a 1-0 lead in the first half with a goal from Michael Chung and later extended the lead to two in the second half when Hannah Matsushita’s shot crossed the goal line as the Strykers’ keeper was trying to stop the ball.

Minutes later, the Strykers’ Samuel Quan drew a foul near the goal that set up a free kick for his team. Teammate Kevin Zhu’s success on the ensuing kick ignited the Strykers’ late comeback.

[The Wings FC’s Masaki Ujiie tries to get his foot on the ball to take it away from the Paintco Strykers’ Kevin Zhu Saturday during a U12B match of the Chevrolet Robbie Webber Youth Soccer League at the Guam Football Association National Training Center. Zhu scored once on a free kick in the 2-2 draw.]

In other U12B games, Community First beat the Southern Cobras 7-1, the Sidekicks edged Quality 2-1, the Samurai Heat defeated the Wolverines 3-1 and later blanked the Crushers 2-0, and the ASC Islanders Asut battled to a scoreless draw against Tumon.

Two goals from An Truong and one each from Ethan Elwell, William Fejeran and Sammy Larkin paved the way for Quality’s 5-1 win over Community First in the U12A division. Community First’s Peter Garland scored his team’s lone goal. In other U12A games, Quality Blue blanked the Orange Crushers 2-0, the Wings edged the Wolverines 2-1, the Sidekicks settled for a 2-2 draw with the Tigers and the Strykers slipped past the Islanders Betde 2-1 when Mateo Ortega scored the game winner late in the second half. Teammate Aiden Dickson also scored, while Mia San Nicolas scored the lone goal for the Islanders.

In the U14A division, the Wings FC were the early victims of the newly instituted rule disallowing slide tackles in the field of play. Already playing short with the minimum three players, Shashikant Kotwal received a red card for a slide tackle deemed dangerous in the eighth minute of play against the Islanders Betde. The game was then abandoned due to the Wings FC not having enough players on the field. The score was tied 1-1 with goals from the Islanders’ Tevin Pangelinan and the Wings’ Xavier Kirksey. In other matches, Quality edged Community First 3-2, and the Sidekicks defeated the Strykers 5-2. 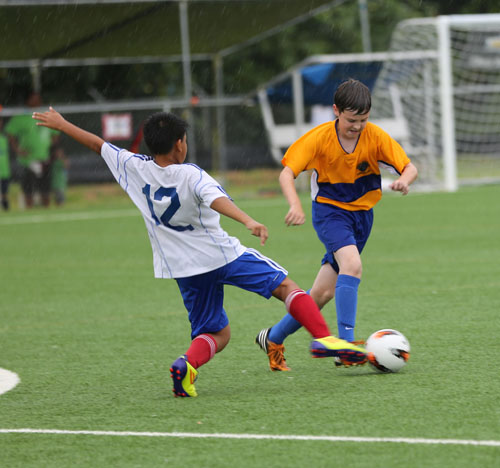 [Quality Distributors Red’s An Truong extends his body in attempt to prevent Community First’s Peter Garland from charging toward the goal during a U12A match of the Chevrolet Robbie Webber Youth Soccer League at the Guam Football Association National Training Center. Truong and Garland each scored once for their respective teams. Quality Red defeated Community First 5-1.]

In Aloha Maid All-Girls League action, the Doosan Crushers sank to third place following a 1-0 loss to the Samurai Heat. Tara Tyquiengco scored for the Heat. The Mangilao Soccer Club now rests alone at the top of the league standings with a 6-1 win over the ASC Islanders Asut. Skyylerblu Johnson and Andrea Odell scored twice and teammates Abbey Iriarte and Erlissa Delfin each scored once. Caylani Estoy scored the lone goal for the Islanders. The Islanders Betde picked up its first win edging Quality Distributors 3-2. The Islanders goals came from Paris “Mames” Blas, Haani Taitano and a Quality own goal. Tara Usita-Lee and Sabrina Wiegand scored for Quality.