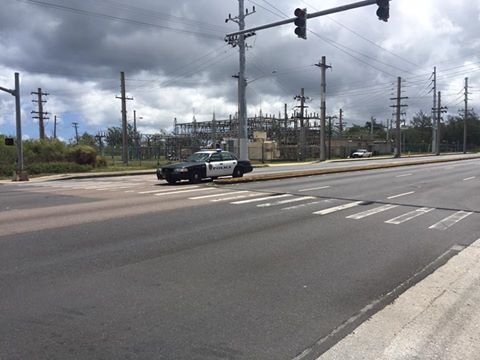 The vehicle, a 1995 Honda Accord was in the middle lane, traveling northbound at the time it collided with the pedestrian.

Guam – Guam’s chief medical examiner says Eric Bell, the man who was struck by a vehicle while walking his bike across a crosswalk ultimately died of a serious bloodstream infection and pneumonia.

Dr. Aurelio Espinola additionally says bell suffered a brain contusion, fractured legs and ribs. Bell was struck on June 2nd … He passed away on June 17. GPD investigators shut down portions of route 1 near the Micronesia mall today to investigate bell’s death. GPD Captain Kim Santos says that no arrests have been made as of yet in connection with Bells death. She also says they are withholding the name of the driver who struck Bell until the investigation is complete. The accident was reported back on June 2 at about 6 in the morning. GFD units responded to an auto pedestrian accident. Capt. Santos says bell was on the Fatima dr. Access road when he used the crosswalk near the Micronesia mall to get to the opposite side of the street. Captain Santos says bell was not on his bike at the time and was walking his bike along the crosswalk. The vehicle, a 1995 Honda Accord was in the middle lane, traveling northbound at the time it collided with the pedestrian.