The CNO and his wife toured facilities that make a difference in the day to day lives of Guam Sailors and their families.   They started their morning at the base’s Fleet and Family Support Center and state-of-the-art Charles King Fitness Center. They also walked through the nearly completed U.S. Naval Hospital Guam, which is currently being constructed.

Additionally, the CNO and his wife stopped by the Department of Defense Educational Activity Guam High School where they took the opportunity to meet with students and learn more about their future endeavors.

“Everything everybody does in the Navy today is important,” Greenert said to a roomful of students and school officials. “What’s most important for our country is the security, prosperity and economy of the Asia-Pacific, and Guam is in the middle of it all.”

While in Guam the CNO also filmed another episode for Conversation with a Shipmate.  During the filming he fielded questions about recent misconduct incidents throughout the military where he emphasized the importance for service members to remain ethical regardless of the challenges they may face.

“You cannot give up your integrity,”  Greenert said. “It’s so important in the Navy, but it’s beyond the Navy, it’s your life. It’s the foundation of how our Navy through decades, through centuries has operated. The ability to trust one another and that trust is founded on having integrity.” 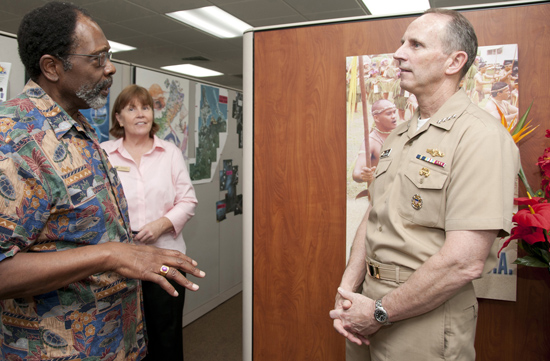 “I’d like to thank our Sailors, our civilians and the families that support them for serving our country, for serving our Navy and making it what it is today,” Greenert said during the interview. “Our Navy is the best Navy in the world and it will be in the future.”

Greenert is en route to Malaysia and the Philippine Islands where he will engage with military counterparts and defense leaders.