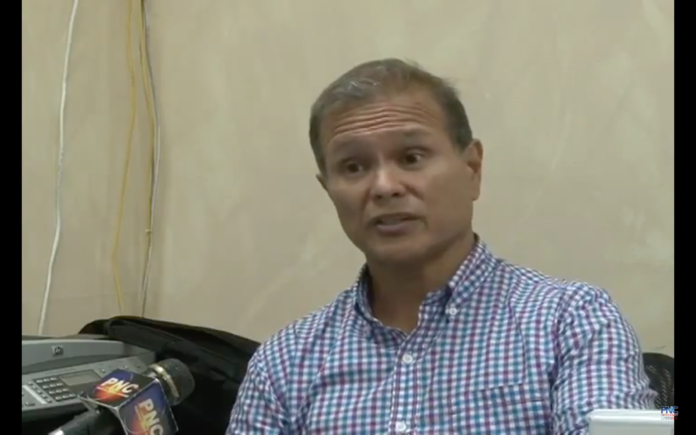 Mark Calvo notes that some portions of the phone call were left out to serve the prank caller’s purpose.

Guam – Governor Eddie Calvo’s Chief of Staff Mark Calvo says he personally vetted the request made purportedly by the Ukraine Prime Minister’s Office to speak with the Guam governor.

Mark Calvo, speaking with host Phill Leon Guerrero on News Talk K57, admits it was he who did the vetting and with an email request that contained facts and verifiable information purportedly from the Office of the Ukraine Prime Minister, allowed the phone call to happen.

“As the chief of staff, ultimately, I was the guy that allowed the scheduling of the call,” Calvo said.  “And the governor relies on his staff—me especially, to vet things.”

The administration explains that they had received an email requesting a phone call with Governor Calvo regarding the North Korea threat from what appeared to be the office of the Ukraine Prime Minister.

“The email did include facts and verifiable information, allowing the phone call to occur,” the release stated.

But according to Homeland Security, mid-way through the call, Governor Calvo sensed something was not right. Nonetheless the governor was “gracious and completed the call in a professional manner.”

The MRFC conducted its investigation and determined the phone call to be fake.

“These professional pranksters also requested that Governor Calvo make the phone call public and share the discussion with President Trump. None of these requests were acted
upon,” the release notes.

Mark Calvo also noted that portions of the phone call may have been removed to serve the prankster’s purpose. Adelup’s chief of staff says he was listening in on the phone call and recalls the prank callers making these requests.

“I was present during the conversation and if it was not in the clip, then of course they edited it out.  And it suits their purpose to do that because it would indicate—you know, the intent of the fraud and the intent to make us look foolish,” Calvo told K57 host Phill Leon Guerrero.

Homeland Security also pointed out in its release that Governor Calvo was not the only one to fall prey to such prank calls. Other high level executives such as U.S. Senators Lindsey Graham, John McCain, Mitch McConnell and U.S. Ambassador to the U.N. Nikki Haley also received similar prank calls.

These prank calls have been posted on the YouTube Channel of comedians Vovan and Lexus.

You can read the administration’s press release below:

A recent interaction between Governor Eddie Calvo and a group claiming to be from the Ukraine Prime Minister’s office prompted action from the Mariana Regional Fusion Center (MRFC).

In September 2017, an email was sent to Adelup, seemingly from the office of the Ukraine Prime Minister requesting a phone call with Governor Calvo regarding the North Korea threat. This followed international media attention on Guam regarding the North Korea threats, and official visits from international officials —including the Chinese ambassador to the U.S. along with his deputy —there was a request to speak to the Governor. The email did include facts and verifiable information, allowing the phone call to occur.

Governor Calvo handled the phone call well. He noted partway through the call that something was not right. Governor Calvo was gracious and completed the call in a professional manner.

During the phone call, topics such as the poor quality of missiles sold to North Korea and the military fleet capabilities of the Ukraine were discussed. These professional pranksters also requested that Governor Calvo make the phone call public and share the discussion with President Trump. None of these requests were acted upon.

Homeland Security Advisor, George Charfauros directed the MRFC to vet all information, providing the initial email and all data from the phone call. Chief of Staff Mark Calvo also contacted a National Security Advisory Council member to inform him of the call.