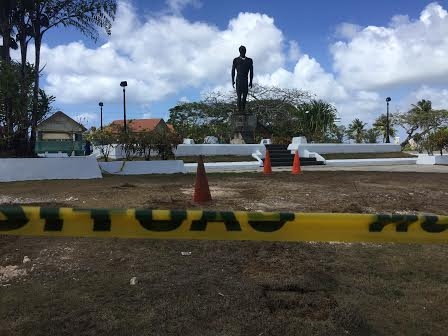 The old statue was put there in the 1970’s and it’s beginning to crack.

Guam – The famous Chief Quipuha statue in Hagatna will soon be removed and placed at the Guam Museum for display.

A new identical statue will be built and put in the old statue’s place. The old statue was put there in the 1970’s and it’s beginning to crack. According to the Governor’s office, in addition to replacing the statue extensive renovations are being made to the park. This is all a part of the preparations for the Festival of the Pacific Arts which begins on May 20th. Chief Quipuha was the first Chamorro to be baptized and he is credited with giving the property for the first Catholic Church to be built on Guam in Hagatna. Congresswoman Madeleine Bordallo, Department of Parks and Recreation and the Historic Preservation Office were contacted to ensure appropriate steps were taken. These renovations were made possible through numerous donors including LMS Guam and “The Works!” foundation.