Guam – Less than 3 months after James Cameron’s historic solo dive to the bottom of the Challenger Deep, within the Mariana Trench, a Chinese Government sponsored expedition is headed to the trench to make a dive of its own.

According to a report from China’s state run Xinhua news agency posted on english.sina.com, the Chinese ship “Xiangyanghong 09” left the port city of Jiangyin on Sunday for the Mariana Trench. The submersible aboard the ship is named “Jiaolong”, after a mythical sea dragon.

The dive is planned for mid-June or early July, according to the report.

READ the report on english.sina.com HERE

On January 6, 2009, U.S. President George Bush  declared much of the Mariana Trench a U.S. National Marine Monument under the authority of the Antiquities Act of 1906.

The Challenger Deep, the deepest known part of the world’s oceans, lies at the southern end of the Mariana Trench and it is within the territorial waters of the Federated States of Micronesia [FSM].

It is not clear yet whether the Chinese government has sought, or needs to seek, the permission of either the U.S. Government or the FSM to dive the Mariana Trench. Nor is it clear which portion of the trench the Chinese plan on diving, but it apparently won’t be the Challenger Deep.

However, the Xinhua report also states the plan is to “attempt the world’s deepest manned submersible dive.”

There have been a number of manned dives beyond 23,00 feet, but only 2 manned dives have touched the bottom of the Challenger Deep.

The first in 1960 when the bathyscaphe “Trieste” went to the bottom with U.S. Navy Lt. Don Walsh and Swiss oceanographer Jacques Piccard aboard. Canadian explorer and filmmaker James Cameron repeated that feat in March when he made a solo dive to the bottom of the Deep. 2 other un-manned submersibles have also made it to the bottom.

The submersible “Jiaolong”  will be manned by 3 “oceanauts”. They have been identified as Ye Cong, Fu Wentao and Tang Jialing. The expedition is being supported by nearly 100 scientists aboard the”Xiangyanghong 09″.

Ye Cong is the lead diver on the expedition, and he is quoted by Chinese media as saying that “the deep sea has amazing resources waiting to be discovered, such as hydrothermal sulfide and manganese nodules.” 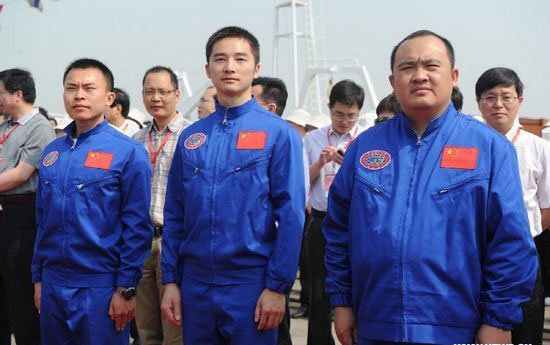 [Xinhua Photo//Han Yuqing. Taken on June 3 and purportedly shows the pilots of  China’s manned submersible Jiaolong in Jiangyin. Xinhua does not identify the names of the pilots.]

According to a report in International Business Times, in 2010, China joined the U.S., France, Russia and Japan  “in the very exclusive group of countries capable of operating manned dives past more than 11,480 feet (3,000 meters) below the ocean surface.”

And just last summer, during a highly publicized dive that took place in the South China Sea, Chinese scientists planted the Chinese flag on the bottom of the seafloor, just as Russia planted its flag at the bottom of the Arctic Ocean in 2007.