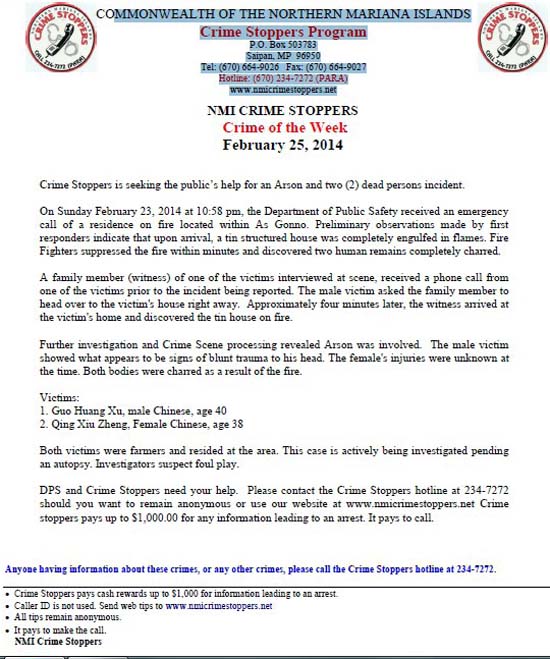 Saipan – A man and a woman were found dead Sunday night inside a home that was destoryed by a fire that police believe was deliberately set. The man “showed what appears to be signs of blunt trauma to his head.”

CNMI Authorities are not calling it a murder, but a release from the CNMI Crime Stoppers Program says “investigators suspect foul play”. The release also says that the preliminary investigation discovered arson was the cause of the fire, although it doesn’t reveal what evidence was found that led to that conclusion.

The fire was reported at 10:58pm Sunday, in the As Gonno area.  The home was a tin-roofed structure.

The dead man has been identified as 40 year old Guo Huang Xu. The woman is identified 38 year old Qing Xiu Zheng, both are “Chinese” and both bodies were “completely charred” as a result of the fire, according to the release. Both victims were farmers.

Anyone with information about this crime is asked to call the Crime Stoppers hotline at (670) 234-7272 or go to the CNMI Crime Stoppers website at www.nmicrimestoppers.net