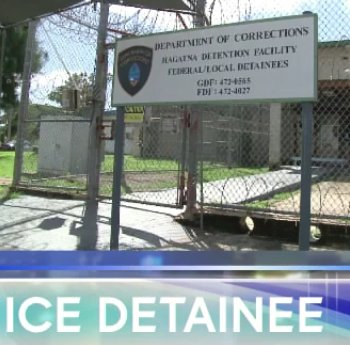 A Chinese man being detained by Immigration and Customs Enforcement says he has been waiting for months to return to his homeland but he says ICE keeps canceling his flight home. To make matters worse, he says he isn’t being treated humanely.

Last month we shared with you a story about three detainees being held by immigration for deportation refusing to eat and drink for two days. One of those men was Li Fu Le, a Chinese national who was detained in Saipan on December 17, 2019. He was transferred to the Hagatna Detention Facility in February where he remains to this day.

Detained for the past 9 months and counting, Li is frustrated by his flight home being cancelled multiple times. And while he understands the impacts the pandemic has had on flights, he has constantly been left in the dark until he went on a hunger strike.

“Before they never show me the paper they are arresting me. First time they tell me they already got a ticket to China right. First time is February 24 I forgot, they canceled it after February 24th, tell me the second time is June 31 they still canceled. And third time is July 8 they canceled it again. The fourth time they tell me it’s August 7. They canceled again. After two days, no drink no food they showed me the paper. Since this June they already know no more air flight to China but they never tell me. They always lying,” Li said.

Li shares that he hasn’t spoken to his family since his detainment and he needs to go home to his father who has liver cancer.

“I don’t know if my dad is dead. I don’t know. I need to call my family and video my family but they never help us,” he said.

To make matters worse, Li says says the food he is fed isn’t enough to keep them from being hungry. He also hasn’t seen a dentist for a tooth issue he has been experiencing for over a month. And since “incoming” was suspended, he and the other detainees don’t have basic necessities.

But it appears that Li fate is in the hands of ICE as a 2018 US Supreme Court ruling has made indefinite immigrant detention the law of the land.