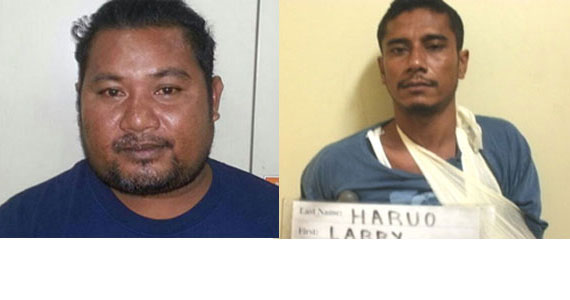 Guam – Two men arrested last week in connection with a June 10th fatal traffic accident have been released by order of the Guam Attorney General.

The accident claimed the life of 23 year old Jayleen Pastor who was a passenger in the back seat of a 1997 Toyota Tercel.

Pastor was a passenger in the back seat of the vehicle which was headed north on Marine Corps Drive in Tamuning when it ran off the roadway and into the side of the Security Title Building across from Denny’s.

Police says 35 year old Larry Haruo  was the driver and he was arrested Thursday night for vehicular homicide, DUI and reckless driving, among other charges. He was released Friday.
Then on Friday night Emanuel Chiro was arrested by GPD for Negligent Homicide & Reckless Conduct. Police say he was the passenger in the front seat. He too was ordered released on Saturday.

AG Spokeswoman Carlina Charfauros confirmed in an email message to PNC News that “Yes. Both men were released. We did not have sufficient evidence to formally charge them in court. We are still receiving information and/or evidence that may allow us to move forward.”

However Charfauros says each man was also issued a Notice to Appear “which means that they may be subject to court at any time within the next three years.”