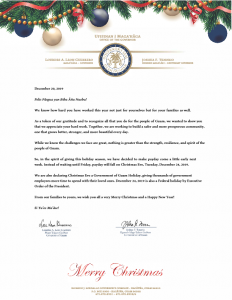 Governor Lou Leon Guerrero has declared Christmas Eve day a GovGuam holiday and also advanced the GovGuam payday from next Friday, Dec. 27 to the day before Christmas.

“We know how hard you have worked this year,” states the Christmas message to all GovGuam employees from Governor Leon Guerrero and Lt. Governor Josh Tenorio.

“So in the spirit of giving this holiday season, we have decided to make payday come a little early … we are also declaring Christmas Eve a Government of Guam Holiday.”

December 24 is also a holiday for most federal employees on island and across the nation.

On Wednesday, President Trump issued an executive order declaring next Tuesday a federal holiday as well.

Certain federal offices and U.S. installations will have to remain open, and the executives in each of those agencies will determine which employees will have to report for work.