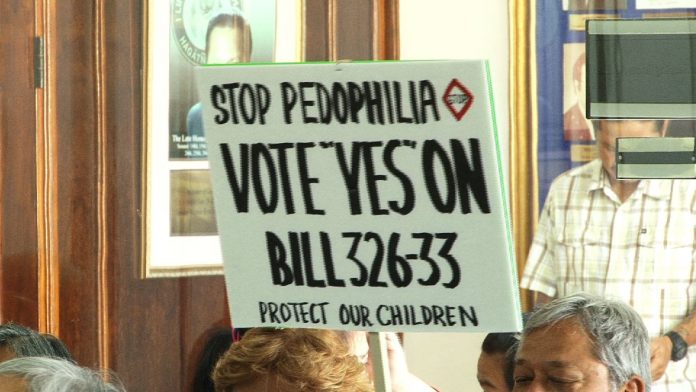 When a similar measure was introduced in 2010, the Archdiocese of Agana heavily opposed the measure. Today, not a single member of the archdiocese submitted testimony on Bill 326.

Guam – Emotional testimony as dozens showed up to a public hearing on a bill that proposes to lift the statute of limitations on child sex abuse claims.

Testimony provided by victims and others were overwhelmingly in support of Bill 326 and noticeably absent were representatives of the Catholic Church.

For the four victims to accuse Archbishop Anthony Apuron of sexual abuse, it was another chance for them to be heard. One by one, Roy Quintanilla, Doris Concepcion, Walter Denton and Roland Sondia’s stories were detailed once again.

All of them spoke of the need for Bill 326, noting that as victims of child sexual abuse, there should be no time limit for a victim to come forward.

Doris Concepcion was the second to come forward with allegations that her son was molested by Apuron, claims Apuron says are lies.

“The one thing I can do once you pass this bill or give me a chance to take him to court; I want the world I want our island people to know that we’re not lying. I’m a mother. Why should I make up a story? My son is dead. I lost my son because of him and he has the audacity to call me a liar,” laments Concepcion.

Walter Denton was the third victim to come forward. Denton says he was raped when he was 13 years old and not long after the abuse he reported it to another clergy member.

“I was walking with Father Jack Niland to the front of the church and as we were walking, that was my opportunity to tell Father Jack what Father Tony did to me. After telling Father Jack what he did to me, he just looked at me and he said, ‘Well, Walter,’ he said, ‘the priest life is a lonely life,'” explains Denton. “From that moment I knew that nothing was gonna get done.”

It’s testimonies like these that emphasize the need for Bill 326 says former Senator Bob Klitzkie, who testified in support of the measure. The bill, introduced by Senator Frank Blas Jr., will lift the statute of limitations indefinitely for victims of child sex abuse to take civil action against their perpetrators or the institutions that protect them.

Vice Speaker BJ Cruz attempted to address this very statute about five years ago, but his bill was essentially gutted on the session floor, making it difficult not only for victims but also for any attorney to represent them. Cruz’s bill, which became law, also only lifted the statute for a period of two years.

“This is what I thought would’ve been appropriat. Let’s go ahead and sue the abusers with their own personal money or whatever … but not the institution. And this is what I thought we could do,” says Klitzkie.  “The hierarchy and processes of the church would be sufficient to clean up the church so that child sexual abuse would become no more than a bad memory–so I thought. I was wrong.”

Klitzkie says it’s clear now with the lack of action from the newly appointed apostolic administrator, Archbishop Savio Hon Tai Fai, that Bill 326 is needed more than ever.

Unlike in Vice Speaker Cruz’s bill from 2010 in which the Archdiocese of Agana opposed his measure, not a single representative showed up today or submitted testimony for Bill 326.