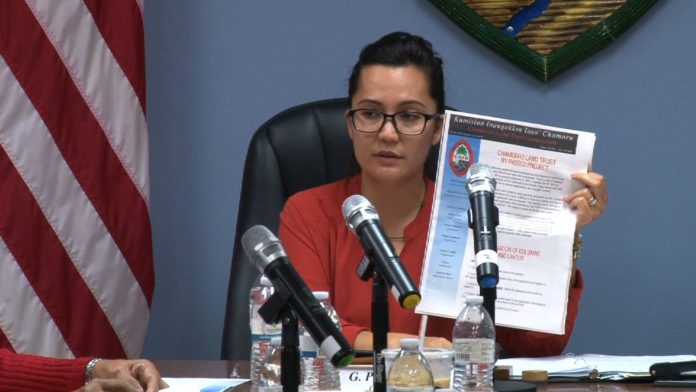 Guam – How the Commission aims to rectify land reform administration at the Chamorro Land Trust—that was the crux of last night’s oversight hearing at the legislature. But the lingering question is whether there’s enough land to go around to meet demand.

This morning on Newstalk K57 radio, Sen. Tom Ada (D) told Patti Arroyo that the commission has its work cut out for it.

“And it’s important now because you’ve got like about 12,000 applicants. Of that 12,000, you’ve still got about maybe 8,000 that’s still waiting. And the demand for land is a lot greater than the supply of land that’s available, so we’re gonna need to go back and tighten things up,” he said.

If anything was made clear at the oversight, it’s that the head of the commission is digging in for corrective action, with the full faith and support of Senator Tom Ada’s Committee on Environment, Land, Agriculture and Procurement Reform.

Nowhere is reformation more critical than in firming up the chain of command.  The Commissioner’s report states that no longer will a Land Trust administrative director be allowed to approve leases without prior Commission consent and the Commission chair’s countersignature.

No matter how far administrative practices may have strayed from the spirit of impartiality in the past, the law is clearly on the side of equality and restraint.

The Chamorro Land Trust Commission’s 1995 Rules & Regulations clearly state that only “after approval of the Commission, the director shall sign all licenses (and) leases.”

Attorney General Elizabeth Barrett Anderson herself has recently opined that all residential and agricultural leases without Commission approval and countersignature are voidable in accordance with law.

In response, Fejeran reports “the Commission moved that all future leases along with the applicants’ files, shall be presented to the Commission for review and approval; approved leases must have a signature block for the chairperson.”

The Commission also moved to follow rules and regs requiring the posting and advertising of the names and application information of those who receive land leases.

Fejeran’s report additionally promises senators CLTC will create Barrigada Bypass Lists to investigate why applicants were skipped over for leases or were not removed from rolls when they failed to update their Applicant Current Information to facilitate land awards.

Sen. Frank Aguon, Jr. (D) was happy to learn that the Commission is back to basics. “I’m glad to hear that there’s a recognition that certain things have to take place in terms of looking at the process, in terms of looking at personnel and perhaps some additional training. And start off with looking at Public  Law 22-38 (Chamorro Land Trust Commission Rules and Regulations), and just recognizing every single section that says ‘first come, first served.’”

The chairwoman says Trust counsel will draft polices and reforms to protect against nepotism, and that the Commission itself will audit all Chamorro Land Trust leases and freeze new leases till after the audit.

Fejeran writes that the Commission has declared no more “switching” application rights; accepted the lease cancellation of Administrative Director Mike Borja’s sister; and removed Land Management Deputy Director David Camacho from all CLT business. It was revealed last week that Camacho had approved 17 of 21 switches in the land lease application wait list—without Commission approval. Four of those switches were approved by Director Borja himself.

Although Fejeran reports there is no evidence that any of the application wait list switches were approved by the Commission, some lease accelerations were made by administrators to prevent homelessness, to accommodate the ill and ailing—as well as applicant family members who were ready to build.