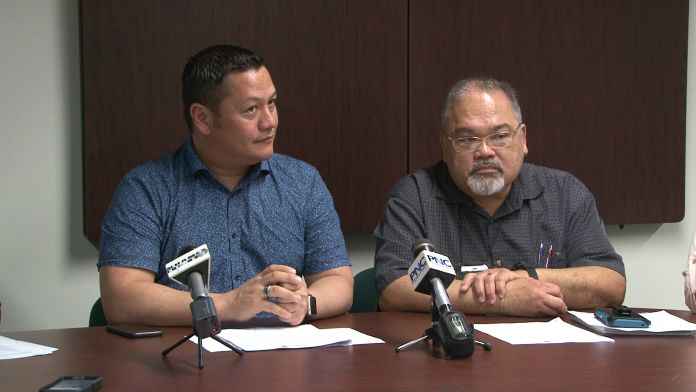 Guam – Federal agencies are aware and apparently keeping a close eye on the Guam Memorial Hospital as yet another deadline looms. The Centers for Medicare and Medicaid were on the phone with hospital leadership last week inquiring about the infamous repealed sales tax that would have guaranteed millions in funding for GMH.

They lost their Joint Commission accreditation and now the hospital is on the brink of losing its CMS certification as well. The implications could mean $30 million in annual federal funding—a critical source of income that, if lost, would cripple the hospital and maybe even be cause for closure. CMS has given GMH an October 3 deadline to correct a multitude of citations in a report, or lose its certification.

At a media conference today called for by the Guam Economic Development Authority, GMH CEO PeterJohn Camacho updated us on the latest communication with CMS.

“We had a conference call with them last Friday. As we’ve told the community in the past we submit our report and then we wait for them to accept the report or not. They had some issues that they wanted clarification on which we were able to do at that meeting and then we also received further clarification from them on some of the other things that they may, they wanted, they were looking at with regard to their plan of correction. We will be submitting that back to CMS by Friday,” noted Camacho.

After submission, GMH will have to once again wait to find out if their updated corrective action plan is sufficient.

What were some of the issues CMS was concerned about? For starters, the repeal of the 2 percent sales tax that would have dedicated .75 percent to GMH.

“They asked for clarification on certain things for example the repeal of the sales tax because that figured into our corrective action plan as part of what we were gonna use for that dedicated funding source moving forward to address the things that we need,” he said.

Camacho says CMS was reassured that they have a backup plan in place, although Camacho wasn’t very clear on exactly what that backup plan was.

“During that call they were asking did you find funds to be able to take care some of those physical plant deficiency … because that’s what they were focusing on and we told them yes,” he noted. “And so we’ve reassured them that that is happening.”

Meantime, some good news for a change: GEDA today announced that $600,000 in qualifying certificate contributions were donated to the hospital to purchase much-needed equipment—equipment identified as a CMS requirement.

The source of the funding is the Guam Regional Medical City’s community contribution, a condition of their qualifying certificate.

But that amount barely scratches the surface and doesn’t make the kind of dent GMH needs to correct all citations in the CMS report. After asking several times without an adequate response, we finally got the number we were looking for.

“We submitted a list to the speaker a couple weeks ago, two weeks ago, on items that’s needed to address CMS citations and that’s about a little over $28 million,” said GMH CFO Benita Manglona.

You can see the list of equipment purchased for GMH here.