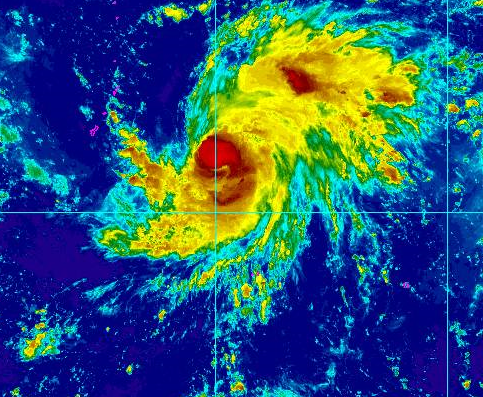 (Guam) – The Commonwealth of the Northern Mariana Islands is bracing for yet another typhoon after the Joint Typhoon Warning Center in Honolulu upgraded Tropical Storm Bualoi to a typhoon late Sunday afternoon.

Typhoon Bualoi continues to move northwest at 13 mph with maximum sustained winds of 75 mph. Bualoi is forecast to continue to intensify Monday, possibly becoming a Category 3 typhoon during its closest point of approach when it passes just north of Saipan late Monday or early Tuesday morning.

Schools and government offices in the Commonwealth will be closed Monday as the typhoon approaches.

As of 7 p.m. Sunday evening, Bualoi was located 12.5 degrees north latitude and 150.0 degrees east longitude, about 620 miles east of Guam.

The Typhoon Watch for Rota and the Tropical Storm Watch for Guam remain in effect. 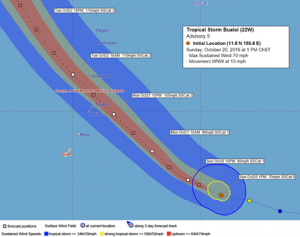 The 2 PM forecast track is holding steady with previous forecasts showing the passage of a category-2 typhoon near and just north of Saipan late Monday night/early Tuesday morning. You should plan for the next category up, particularly for those on Tinian and Saipan. A small southward shift would bring stronger winds to Saipan and Tinian; a northward shift would pull the strongest winds farther from Saipan and Tinian.

This storm will pass over the Marianas late Monday night Monday or early Tuesday morning with a path similar to Super Typhoon Hagibis two weeks ago, but it will not have the same intensity Hagibis had at its time of passage. 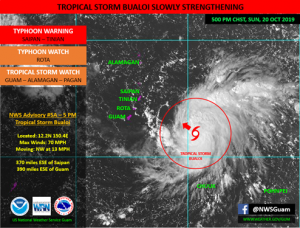