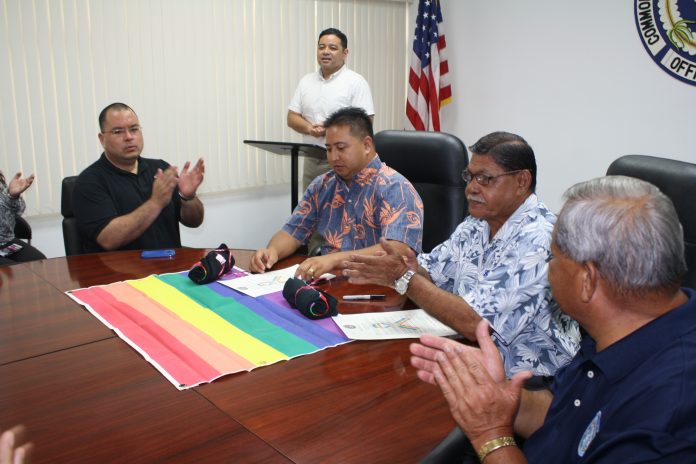 This is the first time in history that the CNMI has ever proclaimed a Pride Week.

This is the first time in CNMI history that a government administration has taken such action, following in the footsteps of President Barack Obama who proclaimed this June 2016 as Pride Month.

He, too, called on citizens “to eliminate prejudice everywhere it exists, and to celebrate the great diversity of the American people.”

The group also took time during the signing to remember the lives lost in the Orlando mass shooting.

“The whole message is to respect each other and respect who we love. And that’s their choice,” Torres adds.

LGBT advocate Frankie Eliptico was overwhelmed by the massive community support at the signing.

“For many years in the CNMI we treat gay, lesbian, or transgender issues as something that was just hushed about in the corner or not to be talked about publicly. What this really means is to have a dialogue and lets begin to opening everyone’s understanding about LGBT issues. To me, that is the most important thing,” notes Eliptico.

He hopes this creates a more equitable environment so that members of LGBT community are treated with the dignity and respect they deserve.

For its members and the community at-large, the proclamation is only the beginning.