The CNMI economy shrank by 20 percent last year due mainly to Supertyphoon Yutu, the U.S. Bureau of Economic Analysis reported.

BEA Director Dr. Brian C. Moyer is in the Marianas to go over his agency’s economic report with CNMI Governor Ralph Torres and Congressman Gregorio Kilili Camacho Sablan and work with local agencies that collect the underlying data.

According to Sablan, Moyer was also in the Marianas just days before Super Typhoon Yutu hit last year to announce the 2017 GDP numbers. Gross Domestic Product for 2017 was $1.6 billion, an increase of 25.1 percent over 2016.

“Even though Yutu struck at the end of the year, the storm affected the overall number for 2018. Tourists stopped coming after the storm and this economic data reflects that negative impact,” Sablan said in a news release.

Sablan said he expected Yutu could have an even larger impact on the economic data for 2019. “Federal spending after Yutu helped to offset some of the losses from tourist dollars last year. It may be that the tens of millions of federal dollars spent this year in the recovery effort will also offset to some extent the continuing decline in tourism and other economic activity caused by the storm.”

According to Sablan, Moyer is meeting with him tomorrow for a detailed briefing on the data. The Congressman is in Rota today to meet the new U.S. Postmaster and constituents and to deliver books to Rota Junior/Senior High School and Sinapalo Elementary.

“I am looking forward to getting the story behind the GDP headline number from Dr. Moyer,” Kilili said. “The information that BEA produces for the Marianas and the other U.S. insular areas is a key tool for policymakers both in Washington and here at home. It also lets the public know whether our economy is headed in the right direction.” 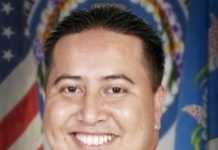