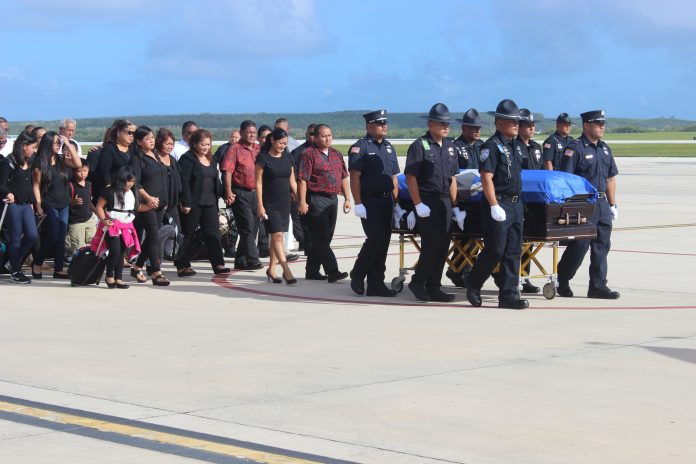 Guam – The untimely death of Governor Eloy Inos in Seattle, Washington on December 28th ushered in a new administration and left the CNMI in a state of mourning. The body of the 8th governor of the CNMI and his family arrived at Francisco C. Ada/Saipan International Airport at three this afternoon, greeted by residents in a public roadside tribute spanning from the airport to Kanat Tabla, Chalan Kiya, Beach road and San Jose.

Governor Ralph Torres announced in a January 6 memorandum that non-critical employees are authorized to take admin leave today at noon, and full day on Tuesday as the islands mourn Inos’ passing.

A holy rosary is expected to be held next Tuesday morning, followed by public visitation, viewing, and last respected by Inos’ immediate family at Our Lady of Mt. Carmel Cathedral. A mass of Christian burial will be held at three in the afternoon preceding his burial at Chalan Kanoa cemetery.

Insular Affairs Assistant Secretary Esther Kia’aina along with several other local and off-island leaders and lawmakers are expected to join the service.

President Barack Obama offered his condolences along with many other leaders, saying that “Inos was a tireless advocate for the Commonwealth of the Northern Mariana Islands and its people. We offer our gratitude for his service, and our thoughts and prayers for those who loved him.” Inos was 66 years old.