Guam – A month after Supertyphoon Yutu, the CNMI’s Chief Executive has been busy, securing key partnerships with counterparts in the Washington. 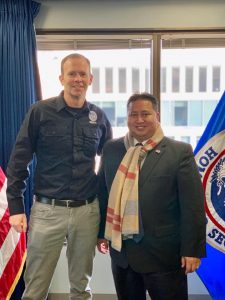 Dubbed the strongest typhoon of the year, Super-typhoon Yutu brought alot of damage to our brothers and sisters to the north. CNMI’s Governor Ralph Torres was recently in the nation’s capital, meeting with FEMA Director Brock Long to discuss ongoing recovery efforts. The Governor stated that  “Administrator Long has been such a critical partner for us since before the storm and has assured me and the CNMI that FEMA and our federal partners will do everything they can to help us on our road to recovery. I thank them and the entire FEMA and federal family on island and from around the country for being away from home and helping us during our time of need.” 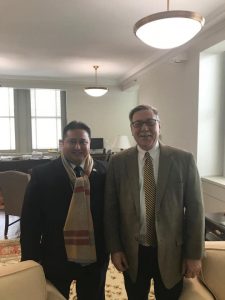 Governor Torres also met with Department of the Interior Secretary Ryan Zinke and Assistant Secretary of Insular and International Affairs Doug Domenech to secure funding for key projects with regards to the ongoing recovery.

“Secretary of the Interior Ryan Zinke, Assistant Secretary for Insular and International Affairs Doug Domenech, Office of Insular Affairs Director Nik Pula have been true partners for the CNMI, and they strongly supported our recovery with $1.6 million in OIA technical assistance and CIP funding. We’re working on more federal assistance in the near future,” Governor Torres said.

Our local community has also played a key role in assisting the CNMI in their recovery efforts. The Guam Army National Guard was deployed to assist and just this weekend, 70 of our guardsmen had returned home, with the remainder returning this week. GPA crews along with crews from the FSM’s utility companies were also in the CNMI lending a helping hand.

Matson, along with other shipping companies servicing the region, also assisted in transporting much needed supplies to assist in the recovery process to include heavy equipment and other infrastructure needs.

According to Bernadette Valencia, Vice President and General Manager of Matson, it was all about lending a helping hand. From military equipment, power poles, to erecting a makeshift Air Traffic Control tower atop shipping containers, Matson is ready to assist when needed.

While in DC, Governor Torres was invited to pay his respects to President George H.W. Bush. At the National Cathedral, Torres joined Congresswoman Bordallo as well as Congresswoman Aumua Amata Radewagen of American Samoa. During the state funeral, the CNMI flag was flown with the 17 other states and territories in attendance.

“A very solemn memorial tribute for a great statesman who led our nation through the end of the Cold War with humility and dignity. When he was Vice President, he visited Saipan in 1985 to tour WWII sites and meet with our leaders, including Governor Teno. He was a former WWII Naval aviator in the Pacific,” Governor Torres said.