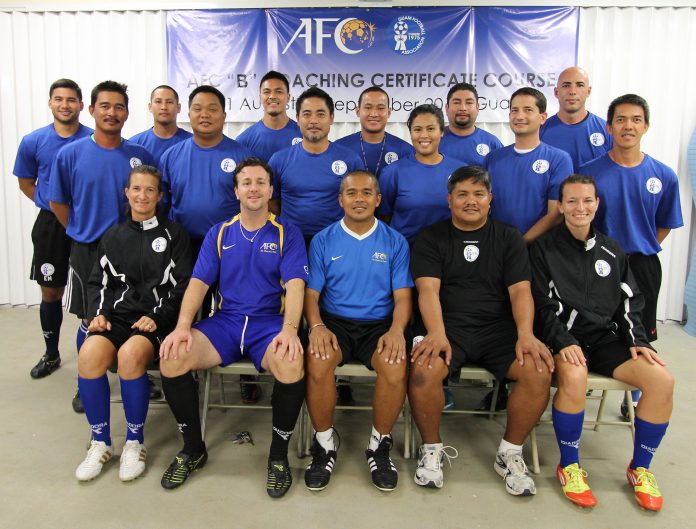 Harmon, Guam – Mark Chargualaf may have given up a large portion of his free time – a total of over 85 hours in two weeks – to participate in an AFC “C” Coaching Certificate Course at the Guam Football Association facility in Harmon, but it was time well spent to further his development as a soccer coach.

“I’ve been a part of soccer at GFA as a player for so long and I felt that committing my time to become a better coach would be a way to give back to the organization that has given me so many opportunities,” the 21-year-old said. “I want to use my knowledge as a soccer player and my playing experience to help the younger generations in the sport.”

The two-week course, facilitated by AFC visiting instructor Jose Ariston Caslib, concluded Aug. 10 and the subsequent AFC “B” Coaching Certificate Course, also facilitated by Caslib, will conclude Sept. 2. The courses are a mix of classroom lecture and practical assessments on the pitch. Caslib has the duty of determining which coaches are ready to earn an AFC coaching license.

Although enrollment is closed for the AFC summer courses, a limited number of observers are welcome to sit in on classroom lectures and watch coaching assessment sessions. Observers won’t be able to fully participate in the course, but may use their observations to help prepare for future courses and apply toward their current coaching method.

At the minimum, coaches for youth teams participating in the upcoming Chevrolet Robbie Webber Youth Soccer Fall League should have a GFA “E” License. GFA will be holding a one-day “E” license course Friday, August 18 beginning at 8 a.m. Youth league coaches need to register for the course by calling the GFA Main Office at 637-4321 or sending an E-mail message to info@guamfootball.com.

“Coaches who enroll in certificate courses will be equipped with the most up to date information and developments of the game important for coaching youth players,” said Caslib, an AFC “A” License coach who also is the current Philippines Football Federation technical director. “Coaches also will receive analytical training to help in improving players.”

Youth league coaches must consider receiving proper certification as a coach, not only for their personal advancement as a coach, but also for proper development of the young players they coach, Caslib added.

For Frank Toves, with his recent transition from coaching U8 teams to a U16 team in the Wings FC, participating in an AFC “C” Course was long overdue, he said.

“I’ve seen so many of the youth players in the Wings Football Club move on to play on Guam’s national teams,” said Toves, who has lost over 45 pounds in the last year in his quest to become a better youth soccer coach.  “I felt it was my duty as a coach to continuously improve and earn certification in order to better help move the talented players to higher levels of play.”

Chargualaf and Toves were two of 16 coaches participating in the “C” course. Other participants in the course currently are youth coaches for different local clubs including Quality Distributors, Samurai Heat, the Wings, the Paintco Strykers, the Lil’ Bombers and the ASC Islanders. One participant, Jershwin Angeles, is a coach for the Tan Holdings Football Club in Saipan.

Should Chargualaf earn his AFC “C” License, he hopes to join the coaching staff of GFA’s newly formed National Academy for elite youth soccer players. Toves will continue to coach teams in the Wings Football Club.

In order to qualify for “B” courses, coaches need to have a current “C” license for at least two years. The “B” course is a considerably longer course. Many of the coaches who qualified for the “B” course are current youth national team coaches, as well as club coaches from Dededo Soccer Club, ASC Islanders, the Orange Crushers, the Wings and the Sidekicks who had previously earned a “C” license.

For more information about the coaching courses or to reserve a seat as an observer for the AFC courses, call the GFA main office at 637 4321.